About 75 percent of Americans believe in extraterrestrials and stories are scattered throughout history. But our attitude towards aliens has evolved in recent years. 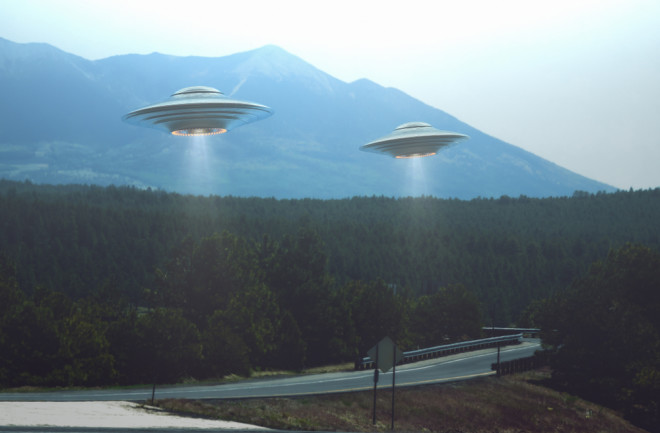 In September 1961, Barney and Betty Hill were driving late at night in the mountains of New Hampshire when they saw a flying object whizzing in the sky. Barney thought it was a plane until he saw it swiftly switch directions.

According to The Interrupted Journey, the couple nervously continued driving until a spacecraft confronted them. They remembered seeing “humanoid-like” creatures and hearing pinging sounds reverberate off their car trunk. And then, they found themselves 35 miles further along on the highway with almost no memory of what had just transpired. They believed they had been abducted.

The Hills reported their experience to the nearby Air Force base and it later became the subject of a book and then a movie. Their experience was widely considered the start of a collective fascination with extraterrestrials. It’s a captivation that persists, and 75 percent of Americans believe there are intelligent lifeforms elsewhere in the universe. But attitudes have changed, and most Americans no longer think aliens are hostile or a national security threat. Social scientists say our attitudes towards Unidentified Flying Objects (UFO) have evolved with our acceptance of technology.

Scholars mark 1947 as the start of the UFO fascination. A pilot flying in the Cascade Mountains in Washington state reported seeing disc-shaped objects. In the next decade, aliens were primarily seen as benevolent, intelligent beings who came to Earth to offer advice or warnings.

In 1961, the Hills reported their abduction and stories about aliens became more sinister. Social scientists, like famed psychologist Carl Jung, analyzed the UFO obsession and found it fit neatly with humans’ long fascination with heavenly ascents. Whereas past societies looked for angels, saints or Gods to descend from the heavens, modern Americans were looking for “technological angels.”

Starting in the 1960s, aliens were both benign angels and menacing demons, which prompted some religious scholars to see UFO fixation as a modern religious movement.

Other scholars saw the popular fascination as a response to society dealing with rapidly changing technology. At the start of the 1950s, for example, most households didn’t have a television. That changed within the decade, and Americans were also aware that technological advancements would soon bring computers into our workplaces, households and even our bodies through devices like cardiac pacemakers.

Most Americans now rely on technology for work and entertainment. People who call out to Alexa to add an item to the grocery list aren’t as technologically anxious as people were in the past. And for decades, that anxiety fueled books, TV and film about extraterrestrials.

The 1982 film, E.T. the Extra-Terrestrial dominated box office sales and was one of the few storylines to depict a kind alien. Most popular narratives featured frightening aliens. The long-running TV series X Files, involved a government coverup about alien life forms. Similarly, the 1997 film Men in Black, based on the comic book series, involved government agents protecting both alien allies and Earthlings from a variety of cosmic criminals.

Stories about abduction were also common, which scholars have analyzed and identified consistent patterns and rhetorical devices.

One scholar suggested that aliens were a stand-in for technological fears. Abductees described how the aliens controlled their bodies and minds. The aliens used high-tech, futuristic gadgets to conduct tests, many of which were described as stressful and painful. In the end, the person had lost time they could not account for.

Another study looked at 130 accounts of alien abductions. The author found that the standard abduction story about aliens waking you from bed, transporting you into a spaceship and then subjecting you to medical tests was a modern myth in which the storyteller placed themselves as the hero. One abductee, for example, made himself a hero saying his “superior genetics” was the reason that aliens had abducted him multiple times.

Abductee stories about humanoids communicating telepathically are outlandish, but compelling. And social scientists think they persuade people to listen.

In 2007, a psychologist interviewed and analyzed people who felt aliens once abducted them. The psychologist concluded these people were sane, but created false memories that fictional accounts partly fueled.

So why would anyone else believe their stories of aliens sucking them into a spaceship and then probing them in all the wrong places? The author found that the stories were compelling because the emotions expressed were both real and relatable. The stories followed a consistent pattern, which made them feel more valid. And, there were also many people willing to tell these tales.

The large amount of people who have described UFO encounters or abductions have prompted scholars to consider the belief as type of myth making.

And myths, one scholar notes, endure because they have both the appearance of truth and societal approval. Thus, UFO fascination flourished because the accounts seemed truthful and many people were willing to trust in a repetitive, but incomplete narrative and to believe there was much more to be learned. Just as they said in the X-Files, “the truth is out there.”