OSIRIS-REx is About to Meet an Asteroid 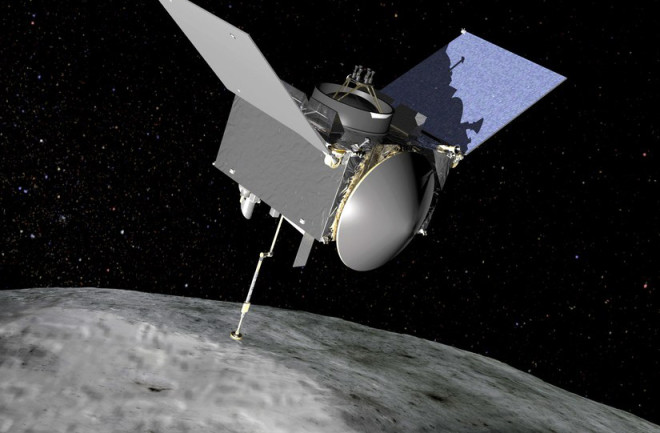 A visualization of NASA’s OSIRIS-REx spacecraft above the asteroid Bennu. The craft will arrive at the asteroid today, Dec. 3, 2018. (Credit: NASA Goddard Space Flight Center)

NASA’s OSIRIS-REx spacecraft, the space agency’s first craft to bring samples from an asteroid back to Earth, is set to rendezvous with its target, Bennu, at around noon EST today.

A special webcast is scheduled for just before the spacecraft reaches Bennu, at 11:45 a.m. EST. During this webcast, NASA officials and scientists will discuss the mission in depth.

OSIRIS-REx (Origins, Spectral Interpretation, Resource Identification, Security-Regolith Explorer) launched in September of 2016 from Cape Canaveral Air Force Station in Florida. For 27 months, the craft has been traveling through the solar system en route to Bennu, which orbits the Sun between Earth and Mars. Once OSIRIS-REx arrives at Bennu, the craft will stay about 12 miles (20 kilometers) away from the asteroid.

Over the next four weeks, the spacecraft will conduct multiple flybys of Bennu, collecting data to help scientists determine the asteroid’s mass. On Dec. 31, OSIRIS-REx will enter an orbit around the asteroid, making it the smallest object ever orbited by a spacecraft.

This set of 16 images shows the OSIRIS-REx spacecraft’s steady approach toward the asteroid Bennu during the last half of October 2018. (Credit: NASA)

This set of 16 images shows the OSIRIS-REx spacecraft’s steady approach toward the asteroid Bennu during the last half of October 2018. (Credit: NASA)

Getting to Know Bennu

For the next 18 months or so, the spacecraft will study the asteroid, exploring its terrain and gathering data that could help show how asteroids like Bennu travel through space and how they could be used as a resource. The craft will also scan the asteroid to find a safe and scientifically interesting location to land and sample.

The craft will then descend to Bennu’s surface, where it will use a robotic sampling arm to grab at least 60 grams of loose dirt and rock (or regolith) from the asteroid to take home. This will be the largest sample gathered from a space object since the Apollo moon landings. After departing Bennu in 2021, OSIRIS-REx is slated to return home with the asteroid sample on board in September, 2023.

Among OSIRIS-REx’s instruments are a tools to measure visible and near-infrared light, temperature, mineral and chemical content, X-rays (to explore its composition), a three-camera suite to help map the asteroid an an altimeter that will help scan the surface to create 3D models.

Bennu was formed so long ago that scientists estimate that some of the minerals inside of it are older than our solar system. A rock which formed in the early solar system and has been preserved by the vacuum of space, Bennu has remained relatively unchanged since its creation. This means that the components that make up the asteroid could be the same materials that formed the planets and sun in our solar system. By studying Bennu, scientists could paint a more detailed picture of the early solar system and better understand how its planets formed.

“OSIRIS-REx is a mission to figure out where we came from, as asteroids are remnants from the formation of our solar system. But while the spacecraft might tell us some things about where we have been and where we are headed, it also can remind us of where we are right now,” NASA officials said in a statement.

By expanding our understanding of asteroids, the mission could also help scientists to better understand the threat that asteroids may pose to humans on Earth. Additionally, Bennu might help astronomers study how asteroids move through space and how they could be mined for resources in the future.