Organic Carbon on Mars Found to Come From Natural "Batteries" 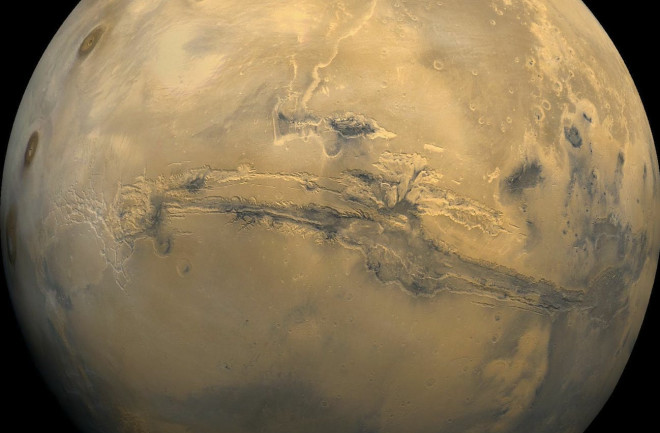 A mosaic image of Mars created from over 100 images taken by Viking Orbiters in the 1970s. (Credit: Viking Project, USGS, NASA)

For years, astronomers have wondered where the Red Planet got its organic carbon compounds, which are thought to be necessary for life as we know it on Earth. That organic carbon often comes from biological sources on Earth, but researchers have been working to figure out how they’re created on Mars. Now, a new analysis of Martian meteorites indicates that the organic carbon on Mars may have come from naturally-occurring “batteries.”

By analyzing three meteorites that fell to Earth from Mars, a research team led by Andrew Steele of the Carnegie Institution for Science found that the meteorites hold organic carbon similar to the kind detected on Mars by NASA’s Curiosity rover. That allowed Steele and his team to study and reveal how organic carbon compounds are synthesized on Mars.

The team found that the compounds were likely created by the electrochemical corrosion of Martian minerals by salty liquid brine. This process works like a natural, corrosion-powered “battery,” providing energy for the reactions that create the compounds, Steele said. This work stems from research in 2012, where Steele and a team confirmed that the organic carbon in these meteorites really did come from Mars and not any Earthly contamination. They also found that the carbon didn’t come from a biological source. This new work aimed to figure out where the carbon came from, if it wasn’t created by life.

“Revealing the processes by which organic carbon compounds form on Mars has been a matter of tremendous interest for understanding its potential for habitability,” Steele said in a statement.

“The reactions that are taking place are probably very similar to what happened on early Earth,” he adds. In fact, anywhere igneous rock is surrounded by salty brines, like in Europa and Enceladus’ subsurface oceans, this process could occur.

A high-resolution Transmission Electron Micrograph (scale 50nm) of a grain from a Martian meteorite. By studying three Martian meteorites, scientists revealed the process by which organic carbon compounds are created on Mars. (Credit: Andrew Steele)

A high-resolution Transmission Electron Micrograph (scale 50nm) of a grain from a Martian meteorite. By studying three Martian meteorites, scientists revealed the process by which organic carbon compounds are created on Mars. (Credit: Andrew Steele)

To reach this conclusion, the research team used a high-resolution electron microscope and a spectrometer to take images of samples from the three meteorites. As you can see in the image above, the team was able to pick out lines from the carbon layers. This type of texture, or layering, happens when the minerals in Martian rock interact with salty liquid brine, creating a corrosive reaction like a battery.

The Search for Life

“Mars could be showing us a key clue as to how life started on this planet,” Steele said, adding that in the search for life, even a negative answer could inform our understanding of how life forms.

“I would like people to understand that our exploration of space is just that, a search for where we come from as much as it’s a search for are we alone,” Steele said.

This paper was published Oct. 31 in the journal Science Advances. The paper was dedicated to the memory of Erik Hauri, a Carnegie scientist and study co-author who died in September.