Obama's Space Speech: We'll Go to Mars in This Lifetime 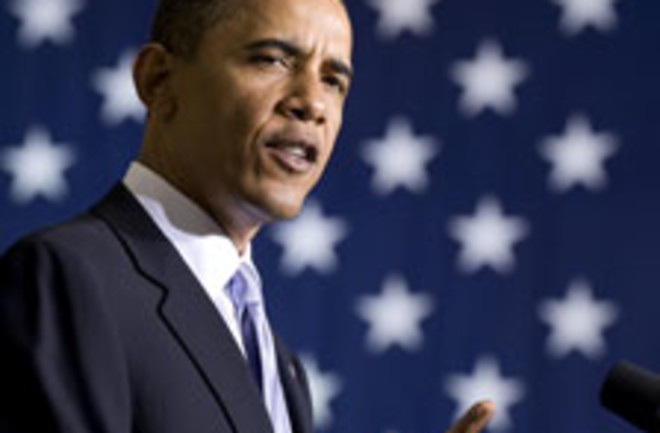 Americans will go to asteroids, to Mars, and maybe beyond--and all in this lifetime, stated President Obama at Cape Canaveral this afternoon as he reassured Americans that space exploration will continue. Speaking at the Kennedy Space Center, where America launched its moon mission decades ago, Obama said he was "100 percent committed to the mission of NASA and its future.'' Obama's proposed space policy (pdf) would increase NASA's budget by $6 billion over the next 5 years, which he says will create 2,500 additional jobs at the Kennedy Space Center by 2012. Acknowledging criticism for some of his changes to NASA's missions, Obama stated that the country must "leap into the future" and not "continue on the same path as before," saying: "

The bottom line is: Nobody is more committed to manned space flight, the human exploration of space, than I am. But we've got to do it in a smart way; we can't keep doing the same old things as before'' [The New York Times].

In his speech, the President declared that by 2025 the nation would have a new spacecraft designed to carry humans “beyond the moon into deep space." He added that by the mid-2030's America would also be able to send humans to orbit Mars and return them safely to Earth, adding "a landing on Mars will soon follow." President Obama stated:

"Space exploration is not a luxury, not an afterthought in America's brighter future.... It is an essential part of that quest" [The New York Times].