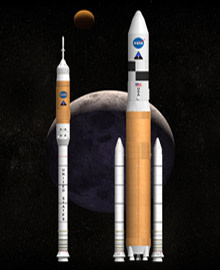 NASA officials have long pronounced themselves ready to move on from the aging space shuttles, which could be retired as soon as 2010, but the incoming Barack Obama administration has raised new doubts about what the next step should be. Last week, news reports surfaced that Obama's transition team was questioning NASA about alternatives to the Ares I rocket that is currently under development as the shuttle's replacement, and now transition team members are reportedly considering using modified military rockets instead.

No decision has been made and the concept raises major technical, funding and policy issues. But in recent weeks, the transition team assigned to [NASA] has been asking aerospace industry officials about the feasibility of such a dramatic shift in priorities [The Wall Street Journal].

The Ares I rocket is designed to bring the new Orion crew capsule to the International Space Station, and eventually back to the moon and on to Mars. Technical difficulties and budget problems have raised doubts about the program, but NASA officials have dismissed these issues as a normal part of the process, and have argued against a change in plans.

NASA officials stressed that moving away from the current Ares rocket designs almost certainly would entail extra costs and lengthy delays in getting the shuttle replacement off the ground. With the first Ares 1 test flight tentatively scheduled for next summer, "going to completely different hardware would put a big gap" in the workforce focusing on rocket development, said Steve Cook, Ares program manager. "We would really be stepping backward" by deciding that the shuttle replacement could ride safely on an alternate rocket [The Wall Street Journal].

However, critics of the Ares program say that it could be cheaper to switch to an alternative now.

Proponents contend the Delta IV and Atlas V rockets -- respectively developed by Boeing and Lockheed Martin in the 1980s -- would be more reliable and could go into operation more quickly than all-new rockets currently under development for NASA by a number of rivals [The Wall Street Journal].

Obama's transition team has also reportedly asked how much money would be saved by canceling the Ares I rocket, and moving directly to the development of the larger Ares V. Meanwhile, NASA is starting to think about the retirement of the space shuttle in very concrete terms, and has begun contacting aerospace museums to discuss the possibility of displaying the retired space shuttles. But in a move that came as a surprise to some observers, the agency says that each institution will have to pay $42 million to cover the cost of cleaning and transporting a shuttle.

NASA spokesman Mike Curie said that, although NASA generally has not charged museums for relics, the agency recognizes that there is now a market for space artifacts. What's more, he said, some museums allowed Apollo-era relics to deteriorate because they got them for free [Orlando Sentinel].

Curie also said that NASA employees are the only people qualified to remove all traces of toxins from the shuttles' fuel systems, but as there's currently no budget for such a clean-up project the museums will have to cover the cost. Related Content: Reality Base: Fights Over Space! NASA Head Disses Obama's Transition Team Bad Astronomy: NASA’s Griffin butting heads with Obama? 80beats: NASA’s Latest Worry: Ares Rocket Could Slam Into Launch Tower 80beats: NASA Considers Keeping Space Shuttles in Flight Past 2010Image: NASA