Newfound, Tiny Sun is Among the Oldest Stars in the Universe 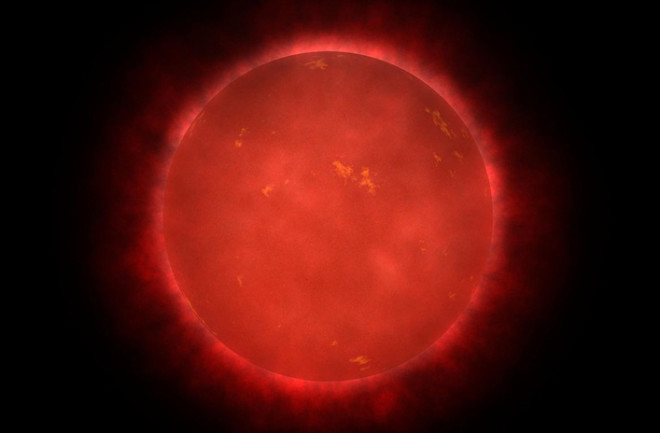 The newfound star is not only one of the oldest stars in the universe, but also one of the most metal-poor stars known. An artist’s concept of a small red dwarf star is shown above. (Credit:NASA/Walt Feimer)

One of the oldest stars in the universe is quietly hiding out in the Milky Way some 2,000 light-years from Earth.

According to a new study published in The Astrophysical Journal, the tiny, 13.5-billion-year-old red dwarf contains barely any heavy elements at all, suggesting it formed out of a nearly pristine cloud of material leftover from shortly after the Big Bang. Furthermore, because the small star is just one-seventh the mass of the sun and is made of primordial matter, it’s making astronomers reconsider the demographics of the very first stars.

The first stars to form in the universe likely flicked on around 200 million years after the Big Bang. These early stars were forged out of the material that was available to them at the time — mostly hydrogen, some helium, and a touch of lithium.

As these stars lived out their lives, they converted their starter elements into progressively heavier elements, which astronomers call “metals.” Eventually, some of these early stars exploded as supernovae, which spewed their trapped metals out into the cosmos. Then, the next batch of stars formed from the resulting, slightly metal-enhanced clouds. On and on this went, with each successive generation of stars enriching the next with more and more metals.

“Our sun likely descended from thousands of generations of short-lived massive stars that have lived and died since the Big Bang,” said lead author Kevin Schlaufman of Johns Hopkins University in a press release. “However, what’s most interesting about this star is that it had perhaps only one ancestor separating it and the beginnings of everything.”

It’s Small. So What?

Although finding a star that’s been around since shortly after the Big Bang is undoubtedly fascinating, the small stature of the old, metal-poor star (succinctly named 2MASS J18082002-5104378 B) is equally intriguing.

In general, astronomers think the universe’s first stars were extremely massive, and lived quite short lives. In fact, until the late 1990s, many researchers thought that the early universe could only form massive stars.

But that view has slowly evolved over the years as simulations have become increasingly sophisticated. For example, a Japanese study in 2012 carried out simulations that showed the formation of low-mass stars in the early universe could potentially be triggered by nearby supernova explosions.

Although astronomers are not exactly sure how tiny 2MASS J18082002-5104378 B formed, “this discovery tells us that the very first stars in the universe didn’t have to all be massive stars that died long ago,” astrophysicist Andrew Casey of Monash University told ScienceAlert. “These ancient stars could form from very small amounts of material, which means some of those relics from soon after the Big Bang could still exist today. That gives us a new viewpoint for star formation in the early universe!”