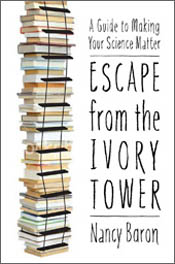 In my presentation yesterday at Scripps, I had a slide in which I jokingly remarked upon the "Science Communication Publishing Juggernaut." I'm not sure publishers are exactly becoming rich off it, but quite a number of science communication oriented books have come out in the last two years, including Randy Olson's Don't Be Such a Scientist and Cornelia Dean's Am I Making Myself Clear? And now there is a new addition that I'm very much looking forward to dipping into: Nancy Baron's

Escape from the Ivory Tower: A Guide to Making Your Science Matter

. Baron heads science communication training for the famed Aldo Leopold Leadership program, which has now taught these skills to scores of researchers. She knows whereof she speaks.

I've only gotten to thumb through Escape from the Ivory Tower

so far, on the plane, but I thought I'd give it a plug now, followed by a more in-depth reaction later. This looks like a very important book, and yet another contribution to the ongoing change in how the scientific world reaches out to the public.