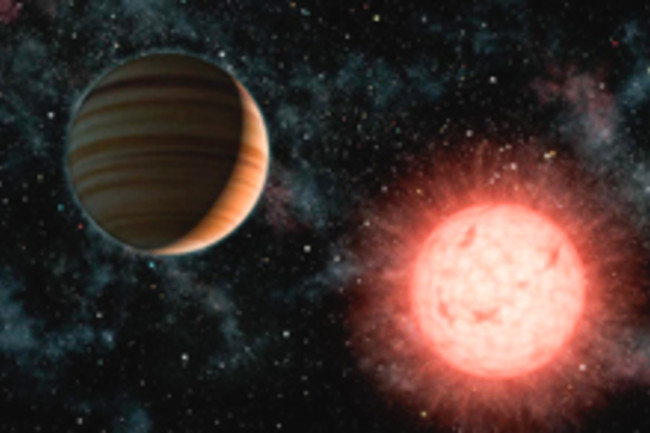 Planet-hunters have yet another tool to use in their quest to discover distant worlds that could harbor life. A group of astronomers has discovered a gas giant with six times the mass of Jupiter orbiting a small, weak red dwarf star by means of a method called astrometry. It's the first time researchers have spotted an exoplanet with this technique, which they say could be useful for finding a different type of planet than those detected by tried and true methods.

Most of the 300-plus known extrasolar planets have been found by tracking changes in a star's light output over time. The most prolific approach, the radial velocity method, looks for shifts in that light caused by the Doppler effect as the tug of an orbiting planet pulls the star nearer and more distant to us along our line of sight. The other approach, the transit method, tracks the periodic dimming of a star caused by a planet passing in front of it [Scientific American].

In contrast, astrometry doesn't focus on a star's light output, but rather on its precise location. The research team conducted painstaking observations of 30 stars over the past 12 years, looking for slight changes in each star's location that would indicate that a planet's gravity was tugging at it. They found what they were looking for with the star VB 10, whose gas giant planet, VB 10b, causes its star to wobble by a small fraction of a degree. The two bodies are about the same size as each other, although the star is more dense and thus has more mass; still, the large planet's gravitational pull was significant enough to cause a slight, observable wobble. The researchers say that detecting the tiny variation was equivalent to measuring the width of a human hair from about 2 miles away.

Radial velocity and other techniques are better at finding very massive worlds in tight orbits around their stars. Astrometry, on the other hand, could open the door to finding a whole new class of planets that were difficult to spot before, said study author Stuart Shaklan.... "It allows you to see planets further from their stars," Shaklan said, because the greater the distance between the two bodies, the more a star seems to shift [National Geographic News].

In the study, which will be published in an upcoming issue of the Astrophysical Journal, researchers also note that this star system is interesting in itself. The star is about 20 light-years from Earth, and

is so small and cool that the newfound planet ... gets very little heat from the star, even though it lies about as far away from the star as Mercury lies from the sun [New Scientist].

"It's possible this star also has inner rocky planets. And since more than seven out of 10 stars are small like this one, this could mean planets are more common than we thought." If there are other planets there, this solar system could be a miniature, scaled-down version of our own [BBC News].

Related Content: Bad Astronomy: A Tiny Wobble Reveals a Massive Planet 80beats: Astronomers Draw Ever Closer to Finding a Nearly Earth Object 80beats: New Telescope Could Reveal a Milky Way Packed With Habitable Planets 80beats: Small, Rocky Exoplanet Is the Most Earth-Like World Ever Seen 80beats: First Ever Weather Report From an Exoplanet: Highs of 2240 Degrees DISCOVER: How Long Until We Find a Second Earth? DISCOVER: The Man Who Made Stars and PlanetsImage: NASA / JPL

The SciencesNabta Playa: The World's First Astronomical Site Was Built in Africa and Is Older Than Stonehenge
Recommendations From Our Store