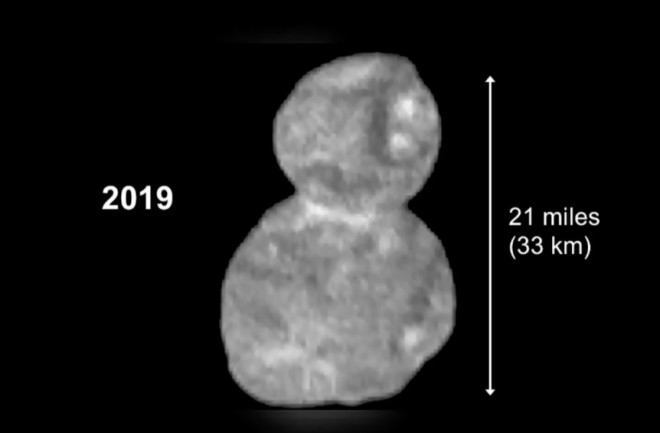 Scientists say Ultima Thule is actually two objects stuck together. They've dubbed the big one "Ultima" and the small one "Thule." (Credit: NASA/JHUAPL)

NASA’s New Horizons’ team released the first close-up images from Ultima Thule on Wednesday afternoon. Even at the speed of light, signals from the outer solar system take a long time to reach Earth. But the pictures were well worth waiting for. They reveal Ultima Thule is actually two objects stuck together. That’s prompted scientists to dub the big one “Ultima” and the small one “Thule.”

And while the first images may still be a bit disappointing, the best pictures will be arriving in the days and weeks ahead.

“We have far less than one percent of the data that’s stored on (New Horizons),” New Horizons principal investigator Alan Stern of the Southwest Research Institute said at a press conference Wednesday.

As billions of people across the world ushered in the new year, the New Horizons spacecraft whizzed by a far-flung space rock named Ultima Thule, making it the most distant object ever visited by humanity.

During its closest approach at 12:33 a.m. EST on January 1, New Horizons passed within just 2,200 miles (3,500 km) of the mysterious bowling-pin-shaped rock, collecting data all the while. Within just 10 hours, at 10:28 a.m. EST, the spacecraft successfully “phoned home,” confirming to NASA scientists that it had survived its close encounter with the distant object.

“We have a healthy spacecraft,” announced Alice Bowman, Mission Operations Manager for New Horizons, to a cheering crowd of scientists, engineers, members of the media, and guests on Tuesday morning.

Since New Horizons sent its first post-flyby message, the mission team slowly but surely has been receiving a trickle of data on Ultima Thule (pronounced TOOL-ee, a Latin phrase meaning “a place beyond the known world”), which is located a staggering 4.1 billion miles (6.6 billion km) from Earth.

In a press conference this afternoon, they’ve released their latest batch of results.

New Horizons scientists were surprised by Ultima Thule's binary composition, and the team has spent the past day trying to figure out how the object formed. (Credit: NASA/JHUAPL)

New Horizons scientists were surprised by Ultima Thule’s binary composition, and the team has spent the past day trying to figure out how the object formed. (Credit: NASA/JHUAPL)

What We Know So Far

Ultima Thule is a tiny, icy body known as a Kuiper Belt Object (KBO). KBOs are a distinct class of solar system objects that lie far beyond the orbits of Neptune and Pluto. Although over a thousand KBOs already have been discovered (including the most famous KBO, Pluto), Ultima Thule wasn’t found until 2014.

Because Ultima Thule is so small and distant, it’s very hard for researchers to tease out many of its attributes, even with the most advanced telescopes available today. But from early on, astronomers figured the small body was likely made of dirty ice and rock.

Early observations of Ultima Thule taken by New Horizons suggested that the rock is rather elongated and shaped somewhat like a bowling pin. Today’s imagery reveal that the world is actually two objects which were stuck together in a slow cosmic collision.