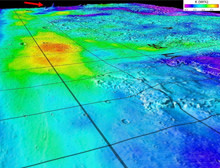 New data from NASA's Mars Odyssey orbiter supports the long-debated theory that Mars once (or twice) had vast frozen oceans on its surface. The location of certain mineral deposits suggests massive erosion and ancient shorelines. A group of researchers now believes Mars had at least two oceans - one about three and a half billion years ago that was 20 times the size of the Mediterranean and a smaller one about two billions years ago.

"These were not like the oceans we know," says [researcher Victor] Baker. "These were transient bodies that existed long enough to accumulate sediment", but were not present for billions of years of geologic history, as Earth's oceans have been [New Scientist].

The Mars Odyssey orbiter identified the mineral deposits using a gamma-ray spectrometer, which

can detect elements a third of a metre below Mars's surface. It found enriched potassium, thorium and iron, lying in shoreline-type patterns, where researchers already suspected water used to lie [Canwest News Service].

Until now, however, their suspicions were mainly based on geographical features such as smooth plains surrounded by higher, more rugged terrain. The new data, to be published in Planetary and Space Science, shows minerals heavily concentrated in the soil below the proposed shoreline and less concentrated above, suggesting erosion of sediments into a large body of water. But study coauthor James Dohm says the new evidence isn't a smoking gun:

"It's consistent with this ocean potential - it doesn't confirm it, necessarily," Dohm said. "I think it's a significant piece of the puzzle" [Tucson Citizen].

Proving the existence of ancient Martian oceans is difficult partly because scientists don't know exactly what they're looking for. Unlike Earth's oceans, Martian oceans would not have had strong tides that pound out shorelines.

"On Mars you have smaller moons. You don't have the tidal forces," Dohm said, which makes it tough to see shorelines. And because Mars is much colder than Earth, the oceans could have been covered in ice, which would block wave action that creates a distinctive look [Tucson Citizen].

The Mars Odyssey has been orbiting the Red Planet since 2001 and scientists hope it will continue sending back data until at least 2010. Earlier this month, scientists reported that NASA's Mars Reconnaissance Orbiter, a different spacecraft, had found hydrated minerals that indicate the presence of liquid water on Mars about 2.5 million years ago. Related Content: 80beats: Martian Stones Suggest a More Recent Watery Past 80beats: RIP Mars Phoenix Lander 80beats: In the Dark and the Cold, Mars Phoenix Lander Begins to Shut Down 80beats: Martian Gullies Were Formed by Liquid Water 80beats: 4 Billion Years Ago, Mars Was Wet and Wild 80beats: Mars Water May Have Been Suited for Pickles, Not for Life

In certain places, volcanic activity could have also created hot springs and a potential environment for extraterrestrial microbes, say the researchers.