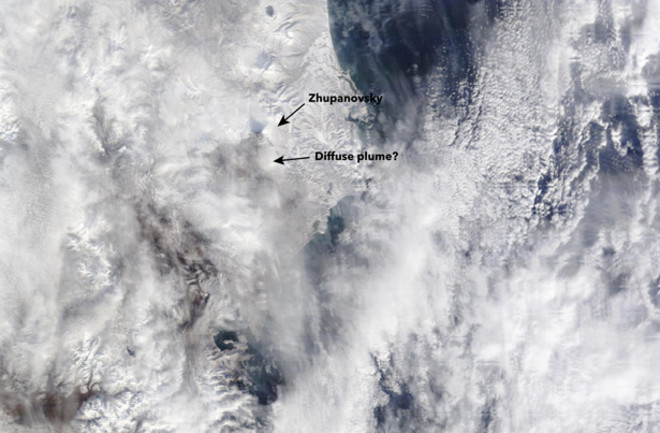 Terra/MODIS image of Zhupanovsky in Russia, seen on October 24, 2013. There may be the wispy remnants of an ash plume from a series of explosive eruptions that occurred the night of October 23, with the plume drifting to the SSE. Image: NASA. I am feverishly trying to finish my poster for the GSA Annual Meeting that starts this weekend in Denver, but a couple of volcanic news items that I wanted to share: Russia Somewhat unexpected, Zhupanovsky on the Kamchatka Peninsula has a fairly impressive explosive eruption on Wednesday night. Zhupanovsky hasn't been on KVERT's list of restless volcanoes, but the complex caldera volcano produced a 5 km (~16,400 foot) ash plume and small explosive eruptions have continued into Thursday (October 24). The last eruption of Zhupanovsky was back in 1959 and for the first half of the 20th century, the volcano produced a half dozen VEI 2 eruptions. Beyond the KVERT report on the eruption, there isn't much news about the eruption -- but based on the description, it seems like a vulcanian eruption, which are common from this volcano. The area around the volcano isn't too populated (although it is 70 km from Petropavlovsk-Kamchatsky), so not many details of what is happening on the ground, but KVERT did mention about 1 mm of ash falling in the valleys near Zhupanovsky. The plume doesn't stand out too strongly in today's Terra pass, but you can see some darkening of the snow around the volcano (see above) -- by this morning, the ash had mostly dissipated according to the alert from the Tokyo VAAC. All in all, a busy week in eastern Russia.Indonesia Meanwhile, Sinabung had another small explosive eruption today (October 24), just as many evacuees had returned to the homes near the restless volcano. This latest explosion produced a plume that reached ~3 km (9,800 feet). The PVMBG declared a continuation of the 2-km exclusion zone around the volcano, but so far, no new evacuation orders have been made.