New Eruptions at Mayon in the Philippines Prompts Evacuations 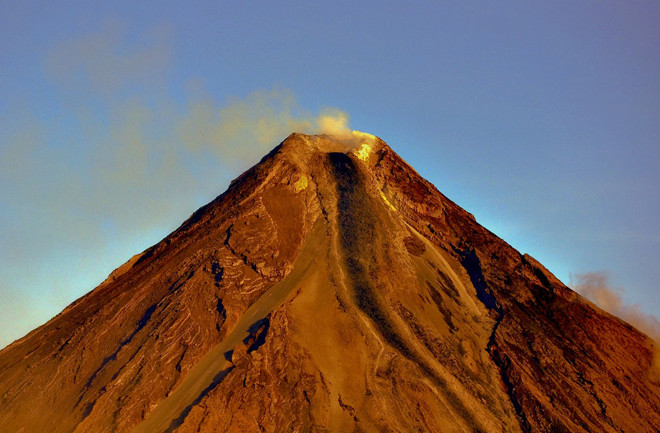 The conical summit of Mayon in the Philippines. Paths of previous lava flows and pyroclastic flows can be seen on the steep slopes of the volcano.

Tryfon Topalidis / Wikimedia Commons Quick post before I take off for the Department of Geosciences Fall Field Trip. If you're looking for the current status of the eruption in Iceland, be sure to check out the Icelandic Meteorological Office. However, today's post is about the renewed activity at Mayon in the Philippines. It appears that lava is now actively extruding at the summit of the volcano, producing rock falls of incandescent blocks of lava. Seismic activity has increased dramatically over the last week and the style of earthquakes suggests to geologists at PHIVOLCS that magma is ascending inside the volcano. They have increased the alert status at Mayon from 2 to 3 (on a 5 level scale) and say that the potential for a "hazardous eruption" within weeks is high. What this means in a practical scene is that over 24,000 people are now being evacuated from an 8-km radius around Mayon. The Philippine government is establishing refugee camps for the first evacuees* and readying more if the situation at the volcano suggests that a larger evacuation is needed. The largest hazard posed by Mayon is that of pyroclastic flows generated by the collapse of the new lava dome forming at the summit (or possibly from any explosive eruptions that might occur). Mayon is definitely one of the most active volcanoes in the Philippines -- and even when it is not in an active eruption period, steam explosions at the summit can be deadly. The Philippine government is watching the activity closely to determine if and when more evacuations are needed. As I mentioned with the eruption of Rabaul, this activity at Mayon has the potential to have much more direct consequences on people than the activity in Iceland. In the Western Pacific and Southeast Asia, hundreds of thousands of people live within a few tens of kilometers of these potentially highly explosive volcanoes. At Mayon, that number is over 250,000 people within 10 kilometers! Keeping a close eye on these eruptions is definitely a necessity to protect those lives. * AUTHOR'S NOTE: This article from the Philippine Star quotes a PHIVOLCS volcanologist as saying that Mayon is "overdue" for a large explosive eruption. This is based on a grand total for 2 prior eruptions in 1814 and 1897. I wouldn't believe this sort of talk as 2 data points cannot be used to set such a pattern, even if it existed.