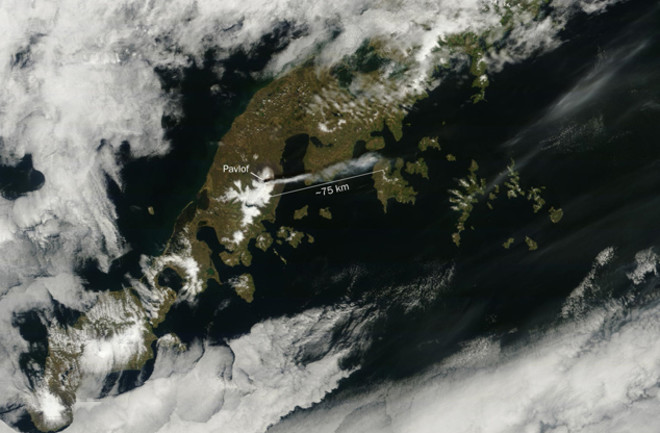 Terra/MODIS image of the eruption plume from Alaska's Pavlof, almost 1000 km to the southwest of Anchorage, seen on June 2, 2014. Image: NASA. Over the weekend, a small eruption began at Alaska's Pavlof. Now it seems like that eruption has begun to intensify, with new reports from pilots near the volcano saying that the plume now reaches more than 6.5 km (22,000 feet) and the latest update from the Alaska Volcano Observatory reports that the plume is seen drifting 80 km to the southeast in satellite images (see above). This change has prompted AVO to raise the Aviation Alert Status for Pavlof Red/Warning. This new eruption started just over one year after the last eruption at Pavlof and judging from the images of the eruption (see below) taken from nearby, the activity appears to be pretty similar, with strombolian eruptions and possibly lava flows moving down the flanks of the volcano. Last year's activity lasted a few months before the volcano quieted and the alert status was moved to Green/Normal until AVO moved the volcano back to Orange/Watch on May 31.

The eruption at Alaska's Pavlof, seen on May 31, 2014. The eruption has intensified since these first images. Image: AVO/Paul Horn, Alaska Fish and Game You can catch a glimpse of the eruption on the FAA webcam in Cold Bay. Be sure to check out some of the images of the current activity on the AVO website as well.