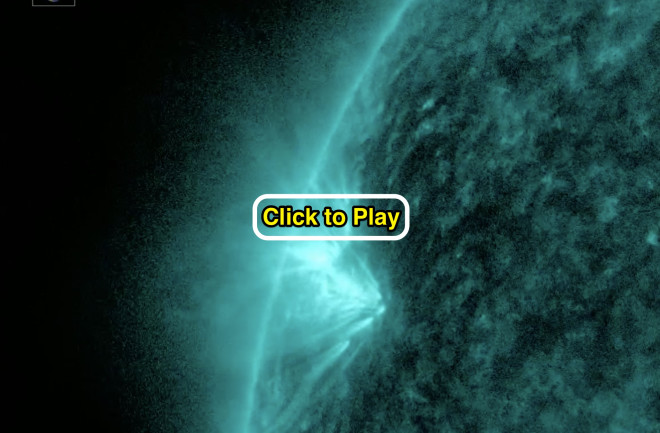 An active region rotated into view and sputtered with numerous small flares and towering magnetic field lines that stretched out many times the diameter of Earth . . . Active regions are areas of intense magnetic energy. The field lines are illuminated by charged particles spiraling along them and easiest to discern when viewed in profile. The colorized images were taken in a wavelength of extreme ultraviolet light.

If you didn't notice the little inset picture of the Earth, check it out in the upper left corner. It's rendered to scale and offers a sense of just how large the feature's on the Sun's surface are. After reaching a peak in 2014, solar activity has been calming down and is headed soon for a minimum in the 11-year solar cycle. In recent months, the Sun has been particularly placid — at least relatively speaking! — with a dearth of sunspots and active regions.

A comparison of images acquired by NASA's Solar Dynamics Observatory spacecraft. (Source: NASA SDO) I made the animation above to show just how different the Sun's visage looks at different times in its activity cycle. It consists of images taken by SDO — the first in April of 2015 when the Sun was still quite active, and the second today, May 30, 2018. Today's image shows just one active region, the same one rotating into view in the video up top. The image from 2015 shows multiple active regions. As I mentioned in a post earlier in May, there are indications that this upcoming solar minimum could be particularly deep.