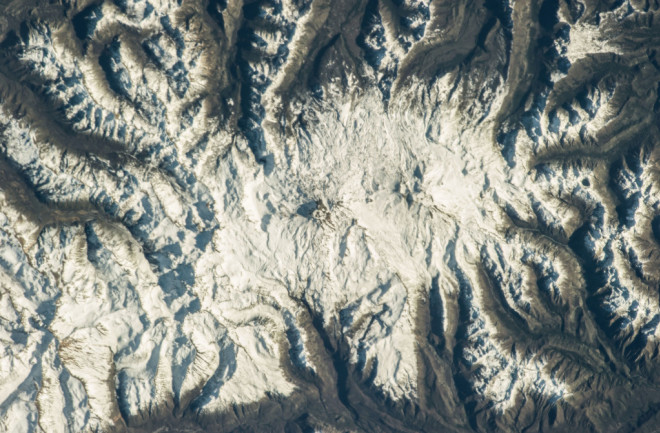 A map of the Nevados de Chillan, showing the location of the new crater formed on January 8, 2016 (red star). SERNAGEOMIN Over the weekend, one of my picks for volcanoes to watch in 2016 fulfilled its promise with a small explosive eruption. On January 8, Nevados de Chillán produced what the SERNAGEOMIN thinks was a steam-driven (phreatic) explosion. Likely, magma rising up under the volcano caused the water in the crater area to heat up, creating the explosive vapor. Nevados de Chillán is actually a complex of volcanic vents and this new activity is centered around the Nuevo, Arrau, and Chudcún vents (see above). An overflight of the volcano shows a small new crater formed by the explosion on January 8. Some people near the volcano captured the explosion on video (see below), showing the relatively small, dark grey plume from this eruption.

Based on the relatively low temperature of the steam escaping from the new crater, the SERNAGEOMIN does not think that magma is at or near the surface, but expects a pattern of small ash and vapor emissions or more steam-driven explosions. There is now a 1-km exclusion zone around the volcano and most of the hazards from any small-to-moderate eruption would be ash fall---possibly pyroclastic flows and lahars traveling down the surrounding valleys. The yellow alert for the volcano and vicinity will be maintained as well. Arrau is one of the newest domes of the Nevados de Chillán as formed during eruptions between 1973 and 1986. The Chudcún crater was the result of eruptions in 2003

, which was the most recent confirmed eruptive period for the volcanic complex*. *UPDATE: There is an unconfirmed 2008-09 eruption that formed the Sebastián crater.Central America Meanwhile, in El Salvador, Chaparrastique (also known as San Miguel)

had a small explosive eruption

that generated a 1.5-2.5 kilometer (~5,000-8,000 foot) plume (see below) on January 12. This is the first real eruption at Chaparrastique since April of last year, so it seems that the unrest as the Salvadoran volcano has not ended. Eruptions from December 2013

to August 2014 were some of the most vigorous at Chaparrastique since 1967. Seismicity at the volcano is still elevated

, but local officials are maintaining a low level alert for Chaparrastique---although masks and shelters are being prepared

in case the activity increases.)

The small, tan ash plume from Chaparrastique in El Salvador, seen on January 12, 2016 by Aqua's MODIS imager. NASA Over in Nicaragua, Momotombo

. The volcano produced a ~3 kilometer (9,800 foot) ash plume on January 12. This continues a pattern noted by INETER of waxing and waning of the unrest at Momotombo. The activity doesn't pose a significant threat to nearby population (at least not yet) and is apparently becoming a bit of a tourist attraction