Neanderthals Were the Original Artists 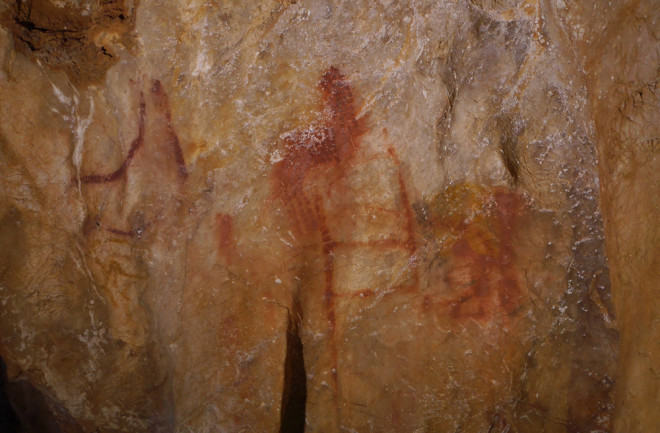 A drawing from Panel 78 in La Pasiega cave in Spain. (Credit: C.D Standish, A.W.G. Pike and D.L. Hoffmann) If you still think Neanderthals were dull-witted brutes, you simply aren’t woke. In 1856, laborers in a limestone quarry in Germany’s Neander Valley unearthed a skull cap that belonged to our closest evolutionary ancestor, and from the start we asserted our intellectual superiority over our thick-skulled cousins. To this day, the hunched-over, doltish caveman stereotype persists, an image that likely stems from Marcellin Boule’s reconstruction of a mostly complete, geriatric Neanderthal skeleton discovered 110 years ago in France. But we were wrong about Neanderthals’ wit, and over the years the pile of evidence has grown from a molehill and into to a mountain. And this week, Chris Standish, an archaeologist at the University of Southampton, and colleagues published a study further bolstering the case for Neanderthal smarts. Using a technique called uranium-thorium dating, they’ve shown that Neanderthals—not humans—are the creative force behind the world’s oldest cave paintings. Further, they say it’s solid evidence that creative expression and symbolic thinking weren’t exclusive to modern humans.

The Artists Formally Known as Humans

The international team of researchers took more than 60 samples of carbonate from three cave sites in Spain: La Pasiega, Maltravieso and Ardales. All of these caves contained ochre or black paintings of animals, geometric shapes, engravings and hand stencils. It was thought that modern humans tagged all the caves in Europe some 35,000 years, a point in time that marked a “creative explosion”—sometimes attributed to a brain mutation—that gave rise to art, spirituality and more complex social interactions. Recent technological advancements have made it easier to date cave art using the uranium-thorium method. It’s a technique that’s typically used to date calcium carbonate materials without damaging the target—although a small sample of the rock is required. Using this method, scientists can obtain a minimum or maximum age for the art they are testing. The date is determined by measuring the ratio of uranium to thorium, which changes over time as a result of radioactive decay. To get a minimum age, archaeologists scrape samples of calcite crusts—known as cave popcorn—that form over the top of drawings. If you get the age of the crusts, anything underneath them has got to be older. Their samples revealed that these paintings in Spain had to be at least 64,000 years old—roughly 20,000 years before modern humans arrived in Europe. This stretches back the timeline even further back than a similar study from 2011. "Our results show that the paintings we dated are, by far, the oldest known cave art in the world, and were created at least 20,000 years before modern humans arrived in Europe from Africa - therefore they must have been painted by Neanderthals," Standish said in a news release. The team published its findings Thursday in the journal Science. We Didn’t Know Better Than Neanderthals Not only does this latest study push back the dateline for artistry in European caves, it suggests Neanderthals were symbolic thinkers. The hand stencils appear to have been deliberately placed in relation to natural features of the cave. Picking a location required planning, acquiring and mixing pigments and a light source to work in the cave. In other words, a Neanderthal didn’t just trip and leave a handprint; this was a very deliberate process. Cave paintings have been found across a large region and timeframe, which suggests a long tradition of artistry. In another study, published inScience Advances, scientists dated punctured and colored marine shells to a date significantly earlier than the arrival of modern humans in Europe. Found in a different Spainish cave, these shells were determined to be roughly 115,000 years old. The decorated artifacts were more proof of Neanderthals' symbolic thinking abilities.

Perforated shells found in sediments in Cueva de los Aviones and date to between 115,000 and 120,000 years. (Credit: J. Zilhão) Now that we’ve absorbed these latest revelations, let’s take a moment to recap some of the things we now know about Neanderthal intelligence. In 1957, we discovered that Neanderthals buried their dead—fossilized pollen indicated they might have been buried with flowers. The eight adults and two who infants were discovered in northern Iraq also showed signs that their wounds had been tended to—another notch for Neanderthal intelligence. Other recent findings suggest Neanderthals were proficient tool-builders, may have communicated in song, wore jewelry and even dabbled in medicine and dentistry. They weren’t dimwits; after all, modern humans had sex with Neanderthals. With all we know about Neanderthal intelligence, the theory that modern humans outlived their forebears because we were more cunning sort of loses steam. Rather, we may have just been lucky. Last year, Stanford University evolutionary biologist Oren Kolodny published a paper in Nature Communications that concluded that population dynamics and favorable timing are the reason modern humans outlasted Neanderthals (i.e. it was luck, not skill). For a glimpse of what life would be like if Neanderthals were still around, those classic Geico “caveman” commercials might not be too far off the mark.