Who Were the World's First Artists?

New analysis of old finds upends conventional wisdom about where and when the first artists evolved. Hint: They weren’t Homo sapiens. 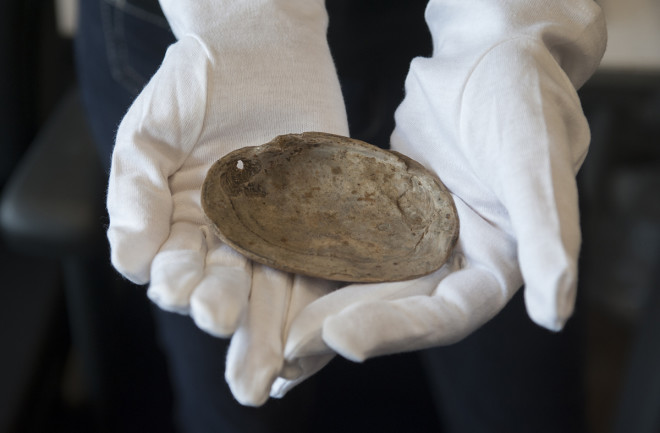 Along with his famous Java Man fossils, 19th-century anatomist Eugène Dubois collected shells with small holes that appeared to be made by shark teeth at the site. Henk Caspers/Naturalis

In the 1880s, a young Dutch anatomist named Eugène Dubois set out to find the missing link between apes and humans. He chose to look in Indonesia, reasoning that gibbons resembled Homo sapiens. After four years of searching, he uncovered a skullcap with a simian-like brow ridge and a large brain case, along with other fragmentary fossils, buried near the Solo River on the Indonesian island of Java. Dubois’ “Java Man” became a lightning rod for debate at a time when many in the scientific community still resisted the idea that humans evolved from anything.

Dubois’ missing-link claim was eventually disproven. Java Man was reclassified in the 1950s as Homo erectus and is now called Trinil 2, in reference to the excavation site.

But Java Man wasn’t done causing a stir. Found with the fossils by Dubois, but not studied closely until recently, were artifacts that could help rewrite the story of human cognitive development.

The evidence was stashed away at Leiden’s natural history museum in the Netherlands, where the Dubois Collection has been stored for more than a century. In 2007, an Australian National University Ph.D. candidate named Stephen Munro was studying prehistoric hominin habitats by examining fossil mollusks. Passing through Leiden, he photographed some ancient shells that Dubois had collected with the H. erectus skullcap. On one of them, Munro spotted a zigzag pattern.

Munro’s first thought was that the engraving must be human. His second thought: Some rogue curator might have done it as a practical joke. So he wrote to Josephine Joordens, his colleague at Leiden University, to ask her opinion.

An archaeologist and marine biologist, Joordens was studying Dubois’ shells to understand Java’s prehistoric environment. She and a colleague had already noticed another strange quality: Many of the shells had small holes near their hinges. The holes seemed to have been made with shark teeth, a number of which were found with the fossils. Pressed through the shell with a strong thumb, a tooth would have severed the ligament holding the mussel shut, forcing it open to provide — voila! — a happy meal.

Dating of the sediments established that the shells found at the Solo River site were between 430,000 and 540,000 years old, making the holes the earliest case of deliberate puncturing. The discovery predates the oldest known beads in Africa by hundreds of thousands of years. While researchers cannot definitively say there is a connection between the holes and the zigzag, “the act of engraving was probably discovered in the context of opening shells for food with a sharp tool,” Joordens notes.

Under the microscope, the etching showed that the zigzag had undergone millennia of weathering, confirming that the marks were more than 300,000 years older than the previously oldest known engraving. Wim Lustenhouwer/VU University Amsterdam

Under the microscope, the etching showed the zigzag had undergone millennia of weathering, confirming the marks were more than 300,000 years older than the previously oldest known engraving: a zigzag etched into a piece of ochre by an anatomically modern human in Blombos Cave, South Africa.

“I was really quite blown away when the paper was published in Nature,” says George Washington University paleoanthropologist Alison Brooks. Although there’s no way to know whether the zigzag was communicative or mere doodling, she marvels at the inventiveness of our distant ancestors.

Munro, now curator of the National Museum of Australia, attributes the innovation to the mutability of island habitats, which would require constant adaptation. “It’s no coincidence that this area is such a dynamic place,” he says, also citing the recent discovery — published in Nature last October — of the world’s oldest known figurative art, on the neighboring island of Sulawesi.

Unlike the engraved Javanese shell languishing in museum archives, Sulawesi’s revolutionary cave paintings have been hiding in plain sight. They’ve been a tourist attraction for decades: stylishly drawn wild animals and silhouettes of human hands enlivening dozens of limestone karsts on the forested southwestern end of the island. Because cave paintings deteriorate quickly in island humidity, scientists always assumed the paintings must be less than 10,000 years old.

New dating of Indonesian cave art is rewriting the evolution of creativity. The local pig-deer drawing above is outlined in white at right, alongside a hand stencil. Maxime Aubert; outlines by Ernie Mastroianni after Aubert

Then one day in 2011, a Griffith University archaeologist named Adam Brumm noticed that some of the artwork was covered with calcite growths colloquially known as cave popcorn. That meant they could be dated by measuring radioisotopes using new techniques mastered by Brumm’s colleague at Griffith, Maxime Aubert.

Aubert cut samples of the cave popcorn, shaving the calcite into ultrathin layers in a process he calls micro-excavating. For each sample, he measured the ratio of uranium to thorium, a byproduct of radioactive decay. The proportions gave him the minimum age of the underlying art. A drawing of a local beast known as a pig-deer was at least 35,400 years old, and one of the hand stencils was created at least 39,900 years ago — older than animal paintings in France’s Chauvet cave, the earliest known example in Europe.

These artworks pose a serious challenge to conventional wisdom about the development of our species. Ever since 1880, when the first prehistoric paintings were discovered in Spain’s Altamira Cave, most paleontologists have assumed that humans became fully modern in Europe about 35,000 years ago. European cave paintings were seen as evidence of a “creative explosion” sometimes attributed to a brain mutation, a theory reinforced by the apparent age discrepancy between figurative art in Europe and other, more recent art elsewhere.

“There was a long time when people thought Africans had nothing to do with the rest of the world after the first human ancestors left Africa 2 [million] to 1.8 million years ago,” Brooks explains. The fact that Europe is not uniquely the seat of the earliest art “argues very strongly that the humans who left Africa had the capacity to make images and to make symbols,” she says, “and they probably had it for a while.”

Anthropologist Paul Taçon — a Griffith University colleague of Aubert and Brumm who was not involved in their study — concurs, connecting the Sulawesi paintings to the Javanese shell engraving. “We don’t give our ancestors enough credit,” he quips. “A lot of what we thought was invented by modern humans probably goes back much further in time.” The age-old process of migration and adapting to unfamiliar circumstances may have spurred artistic expression through countless small, creative explosions. “Abstract design was probably something that archaic humans engaged in for hundreds of thousands of years,” Taçon says.

The search for the origins of art is going global. Taçon is currently studying rock art in Australia, China and Malaysia. Brooks is scrutinizing cave paintings in Namibia. Aubert is looking at rock shelters in Borneo. And Joordens is returning to the site first dug up by Dubois, in search of the masterpieces Java Man may still be hiding.

[This article originally appeared in print as "Making a Mark."]