NCBI ROFL: Want your rat to get it on while high on ecstasy? Play loud music.

Effects on rat sexual behaviour of acute MDMA (ecstasy) alone or in combination with loud music.

"Surprisingly, one hour exposure to loud music, which per se resulted ineffective, antagonized the suppressive effect of MDMA by increasing the percent of animals displaying sexual activity. However, combined treatment of MDMA and music stimulation did not fully restore normal sexual behavior as the animals reaching ejaculation still showed a marked reduction of copulatory efficiency. These findings demonstrate that the systemic administration of a single low dose of MDMA, alone or in combination with loud music, which is commonly present in certain environments such as rave parties, notably impairs copulatory activity of male rats." 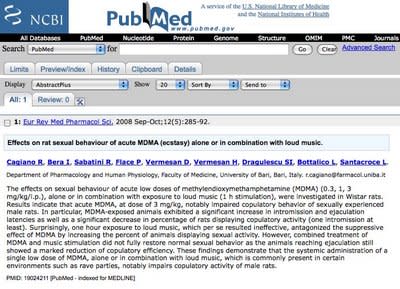 Thanks to Sasha for today's ROFL!