"Napoleon Dynamite, the quirky hit film from 2004, is a fascinating portrayal of a teenager with social difficulties. The character Napoleon provokes intriguing diagnostic questions in distinguishing between mental illness and the spectrum of normal behavior. He demonstrates several symptoms of Asperger's disorder, yet he also challenges the notion that children and adolescents with Asperger's spectrum disorders will not be accepted or understood. He forms genuine, connected friendships, and fans of the movie appear to celebrate his quirkiness rather than ridicule his oddities... ...With the rise of computer technology, our culture has fully embraced the idea of what has come to be called "geekdom," and the authors consider the idea that Napoleon's popularity may be a more rural equivalent for this phenomenon." 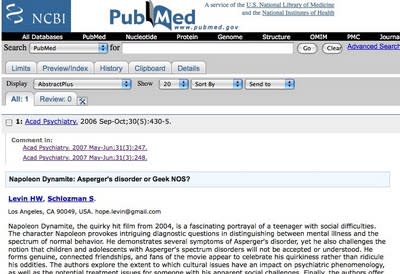 And be sure to check out the related comments, including: "Napoleon Dynamite has Asperger's? Gosh, It's called cultural competence, you freakin' idiots."

Thanks to Eleni for today's ROFL!