NCBI ROFL: Experimental setup: listen to laughter while a scientist burns your hands with a laser. 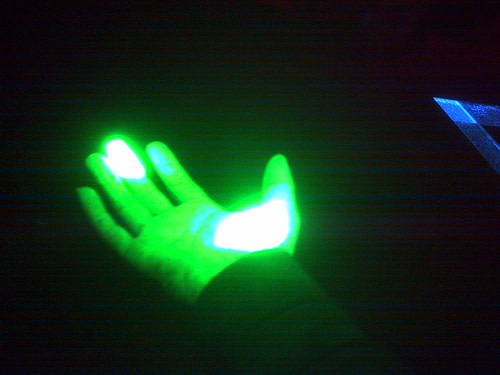 Modulation of pain by emotional sounds: A laser-evoked potential study. "BACKGROUND: Previous studies have shown increases in experimental pain during induction of a negative emotion with visual stimuli, verbal statements or unpleasant odours. The goal of the present study was to analyse the spatio-temporal activation patterns underlying pain augmentation during negative emotional sounds. METHODS: Negative (e.g., crying), positive (e.g., laughter) and neutral (e.g., distant traffic) sound samples of 4 s duration were presented while noxious laser stimuli were administered to the dorsum of the right hand in 16 healthy participants. The electroencephalographic laser-evoked potentials (LEPs) were modelled using six equivalent source dipoles located in the left and right fronto-opercular/anterior-insular cortex, left parietal operculum, left primary somatosensory cortex, medial parietal cortex and left medial temporal cortex. RESULTS: Negative emotional sounds were associated with stronger pain than neutral or positive sounds. The source activity in the left medial temporal cortex, purportedly involving hippocampal formation, in the epoch 294-330 ms was greater during negative than neutral or positive sounds. In the left fronto-opercular/anterior-insular cortex, negative sounds failed to show the positive potential component at around 260 ms that was observed during positive and especially during neutral sounds. CONCLUSIONS: Results suggest increased input of pain-related information into the hippocampal formation when listening to negative emotional sounds, which may in turn facilitate temporal binding between representations of noxious and other behaviourally relevant stimuli, and perhaps associative learning. Absence of the positive potential component fronto-opercular/anterior-insular cortex during negative sounds points to a slow attentional disengagement from pain and increased awareness of the painful stimulus." 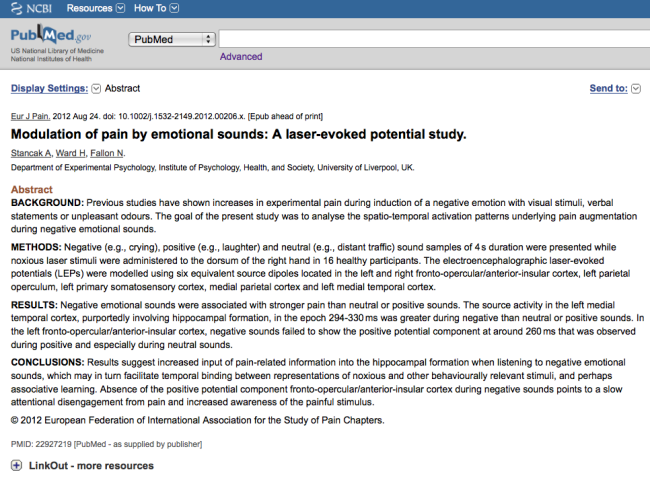