NCBI ROFL: Does regifting make you an a**hole? 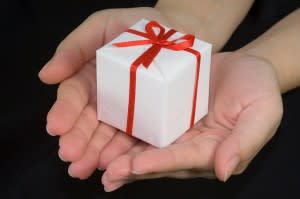 The Gifts We Keep on Giving: Documenting and Destigmatizing the Regifting Taboo. "Five studies examined whether the practice of regifting-a social taboo-is as offensive to the original givers as potential regifters assume. Participants who imagined regifting a gift (receivers) thought that the original giver would be more offended than participants who imagined that their gifts were regifted (givers) reported feeling. Specifically, receivers viewed regifting as similar in offensiveness to throwing gifts away, yet givers clearly preferred the former. This asymmetry in emotional reactions to regifting was driven by an asymmetry in beliefs about entitlement. Givers believed that the act of gift giving passed title to the gift on to receivers, so that receivers were free to decide what to do with the gift; in contrast, receivers believed that givers retained some say in how their gifts were used. Finally, an intervention designed to destigmatize regifting by introducing a different normative standard (i.e., National Regifting Day) corrected the asymmetry in beliefs about entitlement and increased regifting." 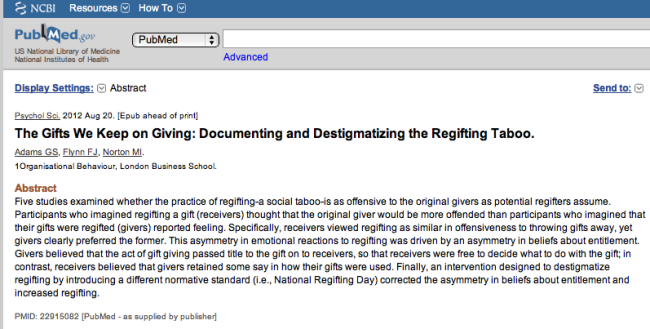 Related content: Discoblog: NCBI ROFL: Is it really the thought that counts?