"Individuals' faces communicate a great deal of information about them. Although some of this information tends to be perceptually obvious (such as race and sex), much of it is perceptually ambiguous, without clear or obvious visual cues... ...Here we found that individuals' political affiliations could be accurately discerned from their faces. In Study 1, perceivers were able to accurately distinguish whether U.S. Senate candidates were either Democrats or Republicans based on photos of their faces. Study 2 showed that these effects extended to Democrat and Republican college students, based on their senior yearbook photos. Study 3 then showed that these judgments were related to differences in perceived traits among the Democrat and Republican faces. Republicans were perceived as more powerful than Democrats. Moreover, as individual targets were perceived to be more powerful, they were more likely to be perceived as Republicans by others. Similarly, as individual targets were perceived to be warmer, they were more likely to be perceived as Democrats... ...These data suggest that perceivers' beliefs about who is a Democrat and Republican may be based on perceptions of traits stereotypically associated with the two political parties and that, indeed, the guidance of these stereotypes may lead to categorizations of others' political affiliations at rates significantly more accurate than chance guessing." 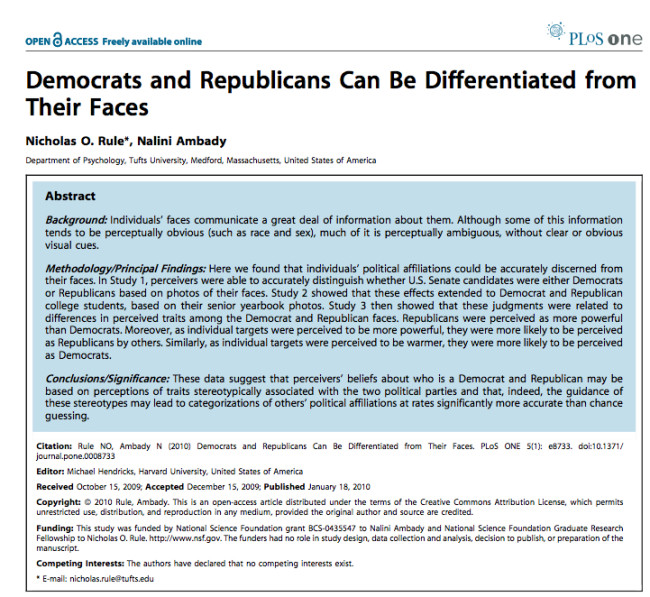 But the real question is, who's more good-looking? Thanks to Mary for today's ROFL!