NCBI ROFL: Blue is for losers.

Better to be red than blue in virtual competition.

"In the 2004 Olympic Games, opponents wearing red athletic uniforms were more likely to win against opponents wearing blue uniforms. To investigate whether this color bias extends to the world of virtual competition, we compared the performance of red and blue teams in a popular multiplayer first-person-shooter (FPS) computer game. For 3 consecutive months, we collected data from a publicly available global statistics server. Outcomes from 1,347 matches played by the top 10 players on the same virtual arena were included. Red teams won 54.9% of matches, and this effect was highly significant. Our data suggest that joining the red team may offer a slight advantage over the blue team in virtual competition, and this should be accounted for when designing FPS games. It is likely that "seeing red" may trigger a powerful psychological distractor signal in human aggressive competition that can affect the outcome of sports and virtual contests alike." 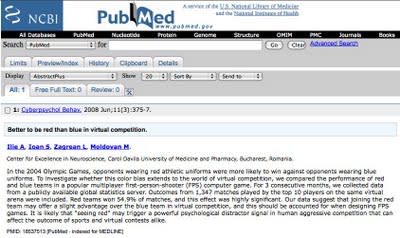 Thanks to Anders for today's ROFL!