NASA’s Successor to the Hubble Telescope Inches Closer to Launch

The James Webb Space Telescope — minus the telescope — recently underwent another round of testing. 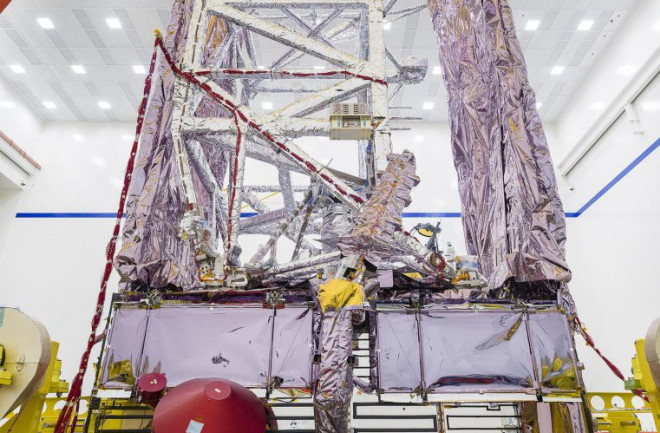 The James Webb Space Telescope (JWST) is NASA’s long-planned – and long-delayed – successor to Hubble. But after a recent spate of testing to mimic the extremes of space, it’s looking like the telescope is still on track for its 2021 launch date.

The telescope itself, along with its instrumentation, passed many of its final tests last year, before being delivered to Northrup Grumman in Los Angeles. Now the spacecraft part of the satellite has also finished similar tests, ensuring that it can safely withstand the violent temperature swings and zero-pressure environment in space.

JWST will be a huge leap forward for space telescopes. With a mirror 6.5 times the area of Hubble’s, JWST will be able to see farther and with greater precision than its predecessor.

But the upcoming observatory is too big to fit into any current rockets in its final form. So engineers have had to design parts of it to fold up like an origami work of art. This goes especially for the large sunshield, which protects sensitive instruments from the sun’s heat and light and takes up as much space as a tennis field. After launch, the spacecraft will slowly unfold, with engineers checking in on the satellite at every step.

Engineers practiced the spacecraft’s ability to fold the sunshield and stow it before it underwent environmental testing. The most dangerous period for JWST will be its launch and initial exposure to the harsh environment of space, so testing it in this folded-up configuration replicates how conditions will be during launch.

Once in the testing room, researchers subjected the spacecraft to the same tests the telescope received last year in Houston. These tests sucked air from the room to simulate the lack of pressure in space, plunged JWST to minus 235 degrees Fahrenheit, and then heated it to 215 degrees Fahrenheit. So far, the spacecraft has braved the harsh conditions well, and is on track to continue tests in advance of its launch sometime in 2021.

JWST’s next challenge will be to test the entire configuration. Engineers will join the telescope and spacecraft, and run a final round of tests before they can declare it ready for launch. If that too proceeds smoothly, then NASA can ship JWST to its launch site near Kourou, French Guiana. Once there, an Ariane 5 rocket will carry the telescope to space, where it can spread its sunshield in the environment it was built for.