NASA's Interplanetary Internet, Coming Soon To A Planet Near You 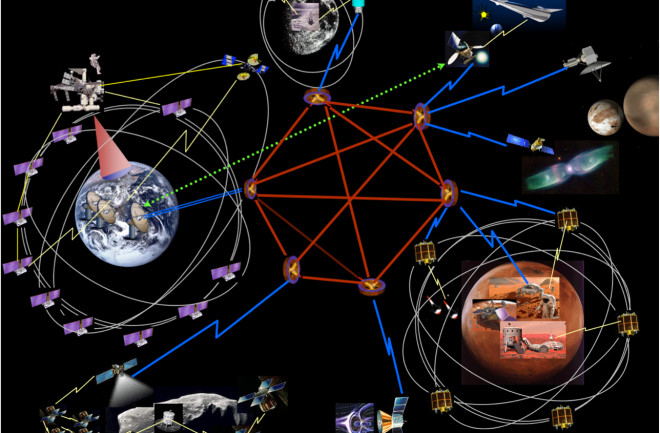 NASA is about to make it a little easier to check your Instagram in zero gravity. Two teams, Science Mission Directorate and Human Exploration and Operations, are working together to finally make interplanetary internet a thing. Previous efforts to bring WiFi throughout the solar system haven’t always been successful, but this time, it could become reality.

It will work using something called Delay/Disruption Tolerant Networking, which is pretty similar to the internet you’re familiar with. But conventional internet doesn’t do well in space, plagued with long delays, noisy channels, and high error rates.

With DTN, even if your connection gets disrupted, it will guarantee data packet delivery once the next communication path opens. Normally, if you lose connection, the data gets dumped. But by removing the need to retransmit during a lag, it saves time and frees up the limited memory used by spacecraft.

Getting WiFi in space is complex, especially given typical extreme distances and fragile connection links. Even if your internet is traveling at lightspeed, it can take considerable time to send a message from Earth to Mars, for example. NASA previously proposed bringing the internet to the Red Planet in 2009, but due to budget constraints, the Mars Telecommunications Orbiter was scrapped. It would have used high-speed radio signals and laser light beams to send the equivalent of three compact disks of data each day.

DTN will now be deployed with the launch of PACE, or the Plankton, Aerosol, Cloud, ocean Ecosystem Mission, an Earth-monitoring satellite operation that will advance our understanding of climate change. The satellite, slated for launch in 2022, will surveil everything from massive storms to algal blooms to carbon cycles, teaching us more about the health of the planet’s oceans.

NASA’s PACE spacecraft will be the first to employ a new form of interplanetary internet. Its engineers are, from left to right,: Nga Cao, Steve Feng, Wei Lu, Chris Zincke, and Zoran Kahric. (Credit: NASA)

But testing DTN goes back to 1998, when the U.S. Defense Advanced Research Projects Agency (DARPA) began its Next Generation Internet initiative, which financed a small team at NASA’s Jet Propulsion Laboratory in Pasadena, California. Their goal was to build a “specialized deep space backbone network of long-haul wireless links” under the guidance of internet pioneer Vinton Cerf. It built upon the Space Communications Protocol Specifications developed by the late Adrian Hooke.

Since then, DTN has been used on Deep Impact, a space probe that in 2005 launched an impactor at a comet called Hartley 2, which caused an explosion equivalent to 4.8 tons of TNT. More recently, NASA tested DTN to remotely drive a Lego car in Germany from the International Space Station and to send a photo at the National Science Foundation’s McMurdo Station in Antarctica, where internet connection is spotty.

“DTN represents a shift in how data will get delivered in the future,” NASA engineer David Israel said in a statement.

DTN is just a part of NASA’s Decade of Light initiative, a growing endeavor to build an internet in the Solar System, including NASA’s Near Earth Network, Space Network and Deep Space Network. As Space Race 2.0 heats up, we’re going to need faster, more reliable ways to connect online — and technologies like DTN will be the path forward to exploring the stars.