The Tatooine-like planet orbits a pair of stars — one sunlike and the other a red dwarf — once every 95 days or so. 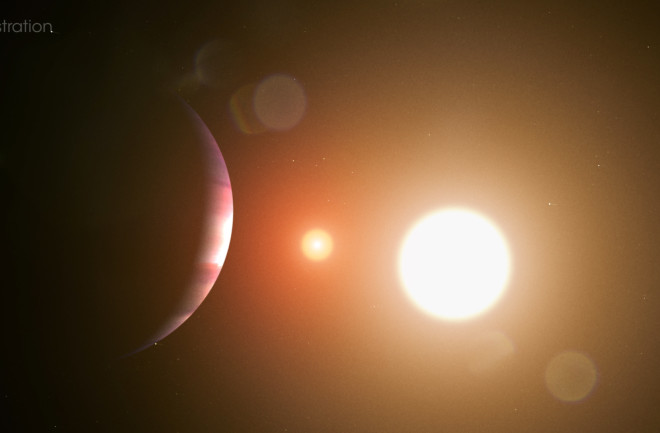 Since its launch in 2018, NASA's space-based TESS telescope has discovered at least 37 confirmed exoplanets and identified more than 1,500 exoplanet candidates. And now, it has uncovered its first Tatooine-like circumbinary planet — a world that orbits two stars instead of one.

Astronomers have found only a handful of such circumbinary planets so far. But the new discovery shows that many more of these exotic systems may be located around bright, nearby stars like those TESS is built to study. By finding and investigating more of these systems, astronomers hope to get a better understanding of how binary star systems form and evolve.

Researchers announced the discovery on Monday at the 235th meeting of the of the American Astronomical Society in Honolulu.

The primary objective of TESS (the Transiting Exoplanet Survey Satellite) is to scan nearly the entire sky to hunt for exoplanets located around the nearest and brightest stars.

And though TESS has already proven its worth over the last few years, it's now also uncovered a unique world dubbed TOI 1338 b, which is the first planet TESS has found orbiting a pair of binary stars.

TOI 1338 b is about 1,300 light-years away in the constellation Pictor. And although one of its stars is slightly larger than our own sun, the other is a tiny red dwarf only 30 percent of the sun’s mass. The two stars also are quite close together, orbiting each other once every 14.6 days. But the planet TOI 1338 b traces a wider path around the pair, taking about 95 days to complete a single orbit.

Astronomers say that TOI 1338 b’s orbit should remain stable for at least another 10 million years, but its orbital tilt changes over time. Although TOI 1338 b currently passes in front of its host stars from our point of view — which is how TESS was able to spot it — after November 2023, the planet's orbit will be too tilted to eclipse these stars for about eight years.

But that's not all that unusual, said Veselin Kostov, an astronomer from NASA’s Goddard Space Flight Center, who presented the discovery at a press conference. This kind of changing orbital tilt is something that astronomers often see with circumbinary planets.

New Planets to Learn From

Out of roughly two dozen currently known circumbinary planets, 12 were discovered by NASA’s Kepler space telescope, a satellite that was ultimately responsible for finding more than 2,300 exoplanets. However, a disadvantage of Kepler's otherworldly catalog is that many of the exoplanets it found are too distant for astronomers to study in detail.

But, unlike Kepler, TESS was designed to find exoplanets around the nearest and brightest stars. By identifying such worlds, TESS is setting the stage for future follow-up observations with more advanced telescopes, such as the upcoming James Webb Space Telescope, which is planned for launch in 2021.

With the discovery of TOI 1338 b, TESS has shown it can increase the number of known Tatooine-like circumbinary planets. And, after all, who wouldn't want to find more worlds plucked straight out of Star Wars?

“We want to see different, new systems,” Kostov said in the press conference.