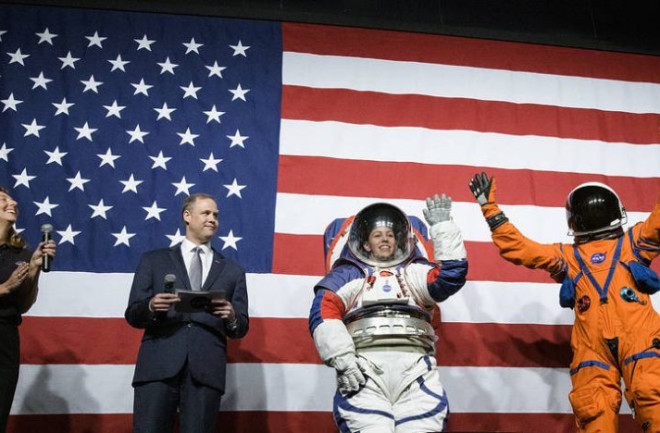 These two new spacesuits will help the space agency put astronauts back on the surface of the Moon, enhance their mobility, and keep them safe along the way. (Credit: (NASA/Joel Kowsky)

NASA revealed two new spacesuits this week that may be worn by astronauts on future missions to the Moon. The suits feature a number of improvements from the Apollo era spacesuits used on the last Moon missions 50 years ago.

The two new suits were shown off by NASA Administrator Jim Bridenstine during a demonstration at NASA headquarters. The suits, called xEMU and the Orion Survival Suit, will be a core part of the upcoming Artemis missions, as NASA prepares to return to the Moon by 2024.

“We are looking to do things in space that we have never been able to do before,” said Bridenstine.

The xEMU, which will be the spacesuit used on the surface of the Moon, looks much different from the Apollo era suits. To enhance mobility for astronauts on the Moon, the suit’s joint areas have been enhanced to allow astronauts to move with ease. Now, astronauts will be able to reach across their body and pick up objects off the ground, two basic functions they couldn’t do in the Apollo suits, or with the suits still used on the International Space Station (ISS).

The suit design will also eliminate the bunny-hopping motion that Apollo astronauts did to get around the Moon. This time, astronauts can have more of a walking motion with only a slight hop.

Besides the mobility, the spacesuits are designed to adapt a wide range of bodies as well, which has been a problem with current spacesuits. For example, an all-female spacewalk on the space station last May had to be cancelled because there was only one medium-sized suit, and the other spacesuits were too large. The new suits were designed with these concerns in mind.

The spacesuits will be modular, meaning they can be changed and adapted as technology changes throughout time. The suits can also be adapted in space by astronauts who may not have the suit engineering background, which means they will not have to go back to Earth to be enhanced.

The CO2 systems in the suit have also been upgraded from the Apollo era suits. Before, the life support system would have a chemical that would hold the CO2 released during the mission, but it could only hold so much. Now with the new suits, the CO2 is burned off and released into space as well as having the chemical holding component. That means an astronaut will be able to stay in the xEMU spacesuit on the lunar surface about eight hours.

There’s also a chance the suit will be tested on the International Space Station during a spacewalk, NASA said during the press briefing after the announcement. Three total xEMU suits will have to be designed, two for the Moon by 2024, and the one of the ISS. With the focus mainly on the Moon missions, there is a possibility the suit will not be tested on the ISS before the Artemis missions reach the Moon. There is a plan to use both the EMU suits, which are currently in use at the ISS and eventually the new xEMU suits in future spacewalks once there are more suits.

The other suits, the Orion suits, will be used solely during launches and return flights to Earth. These will be fully integrated with the launch vehicle as well as tailored to the astronaut inside the suit. On longer journeys, like traveling to Mars, the astronauts will be able to take the suits off once they reach orbit and store them until the flight home.

These suits will also act as a safe haven if there’s an emergency decompression. The astronauts can survive in the suit for six days if there is an issue with the compression on the spacecraft.

“This is in essence, when necessary, a spacecraft,” Bridenstine said.

In order to get the spacesuits ready for a potential Moon mission in 2024, the administration pulled the schedule forward to add room for error in the design process. The Artemis missions are expected to start in mid-2020 in order to reach the Moon within four years.