NASA Just Added a Helicopter to Its Mars 2020 Rover 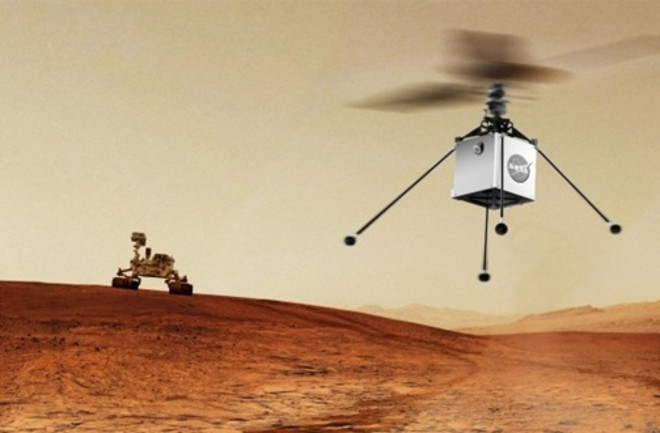 The Mars 2020 rover will be equipped with a helicopter, as seen in this artist’s concept, that will fly above the Red Planet’s surface like no craft before it. (NASA/JPL)

Just under a year before launch, NASA’s unnamed Mars 2020 rover is getting ready for its big mission with the new addition of the Mars Helicopter Scout.

The Helicopter Scout will be the first rotorcraft to fly on another planet. And though the mission is considered high-risk, it could also come with a high reward. If the helicopter is successful, more flying craft could be used in future Mars exploration missions. On this flight, the helicopter isn’t carrying any scientific instruments, though it could on future missions. If anything were to happen to the helicopter on Mars, it won’t affect the rest of the Mars 2020 mission.

On the way to Mars, the helicopter will hitch a ride on the rover’s belly, covered by a shield to protect it during the descent and landing. But the rotorcraft won’t be deployed and flown until a suitable area on the surface is found.

Mars’ atmosphere is thin, so the extraterrestrial whirlybird needed some special modifications to achieve lift. The craft weighs less than four pounds and its blades must spin at around 3,000 rpm, much faster than a helicopter on Earth. The craft will make several test flights of up to a few hundred meters to prove its capabilities.

The upcoming mission to Mars is focused around life on Mars. Not only will the Mars 2020 rover investigate the history of the planet and the possibility of past microbial life, but it will kick off preparations for crewed missions to the Red Planet. The rover is meant to explore and learn more about Mars’ climate and environment, helping identify challenges future crewed missions will likely experience.

Over the past few years, the rover has been prepping for its upcoming journey to the Red Planet. Along with the addition of the helicopter, a new robotic toolkit was just recently added to the rover. With this new technology, the first samples from Mars will be collected and stored by the rover until future missions eventually bring the samples back to Earth for study.

The rover will launch in July of 2020 from the Space Launch Complex at Cape Canaveral Air Force Station in Florida and expected to reach the landing spot at the Jezero Crater on February 18, 2021. The rover is slated to be active for one Martian year, or almost 690 Earth days — though previous Mars missions have often far exceeded expectations.

With an ideal launch window spanning from July 2020 to August 2020, NASA is far from the only space agency with plans for a martian mission. The European Spaces Agency (ESA) is preparing to send their rover, named the Rosalind Franklin, to the Red Planet as well. Along with NASA and ESA, China and the United Arab Emirates are likewise looking to launch missions to Mars next summer.