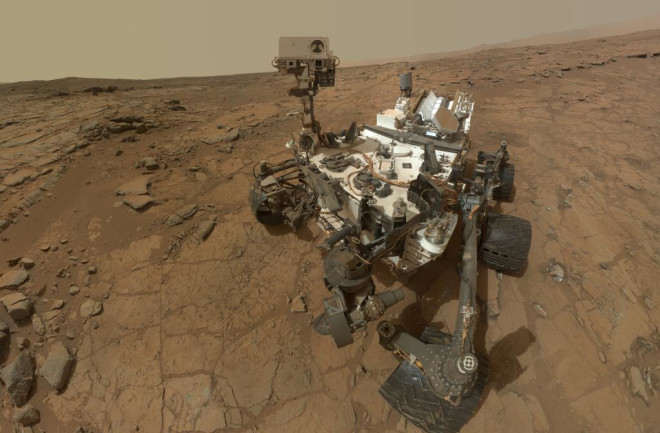 Curiosity's self portrait on Mars. (Image courtesy of NASA/JPL-Caltech/MSSS) After suffering more than a year with a broken drill, NASA’s 5-year-old Mars rover Curiosity is now collecting and analyzing samples once again. The drill sits at the end of Curiosity’s LeBron James-sized robotic arm and is vital for grabbing and dropping dirt into the spacecraft’s onboard laboratory. Scientists at the Jet Propulsion Laboratory (JPL) put many months of effort into hacking a new way to drill after the rover’s tool broke way back in December of 2016.

After testing their techniques on Earth, engineers saw their solution also works on Mars when they penetrated a couple inches into a Red Planet rock named “Duluth” in May. Engineers call the new technique “feed extended drilling.” It works by pushing the drill bit inches past the stabilizer bars that keep the rover steady. NASA says the new technique works more like a human leaning on a wall to steady themselves as they work. On Monday, the space agency announced that they’d also succeeding in getting that sample into the rover’s labs for analysis — a huge challenge in itself. The rover’s arm dropped about “half a baby aspirin worth of sample” into two inlets. Curiosity will start running chemistry experiments on the rock this week.

But this hack also makes it harder to tell how much sample is dropped in for analysis. So engineers expect to keep refining the method as they continue remotely climbing and studying Mount Sharp. “The science team was confident that the engineers would deliver — so confident that we drove back to a site that we missed drilling before,” said Curiosity project scientist Ashwin Vasavada of JPL. “The gambit paid off, and we now have a key sample we might have never gotten.”