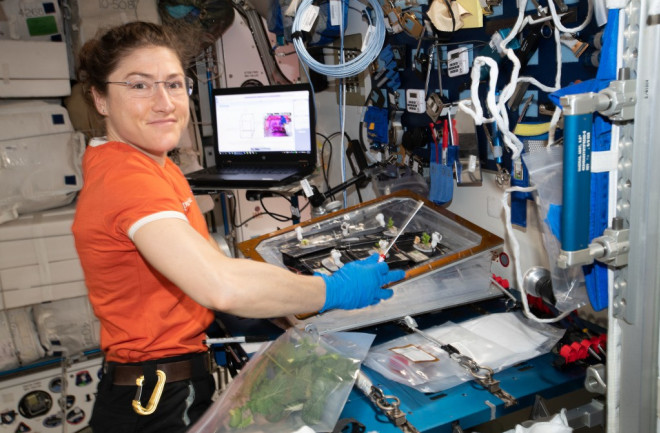 NASA astronaut Christina Koch will break the record for the longest-duration spaceflight for a woman. (Credit: NASA) Ever since the space shuttle retired in 2011, NASA has been paying Russia for rides to the International Space Station. They'd hoped that dependency would finally end in 2019. But with its new lineup of flights and launch dates released this week, the space agency acknowledged they're not quite done needing Russia's Soyuz rockets yet. NASA will remain dependent on Russia for the next round of space station rotations. Thanks to delays in commercial launches by SpaceX and Boeing, which NASA has paid billions to ferry crews to ISS, the space agency is now settling on longer missions for their astronauts, who will continue to hitch rides on Soyuz rockets. In fact, the new long-term crew roster and launch dates for the next year does not list any flights on commercial launches.

NASA had planned to stop buying rides to the space station aboard Russian Soyuz flights by the end of 2019 and switch to buying seats from SpaceX and Boeing instead. But both companies have suffered delays and are still in the process of testing and being certified to fly humans. NASA’s solution, to avoid abandoning the ISS in the meantime, was to purchase two additional Soyuz seats to get them through the rest of 2019 and into early 2020, and stretch out the assignments of their crew. As a result, NASA astronaut Christina Koch, currently on her first spaceflight, will now stay on the ISS for a total of 335 days – a record for any woman in space, and just shy of Scott Kelly’s 340-day record for a NASA astronaut. NASA is hoping to take advantage of the new schedule to learn more about long-term human duration in space, on the heels of their recent findings based on the Kelly astronaut twins. Fellow astronaut Andrew Morgan will also be on the ISS for an extended stay of at least seven months, though his return date isn’t yet pinned down.

What Goes Up Must Come Down

On June 24, three of the current ISS residents, NASA’s Anne McClain, the Canadian Space Agency’s David Saint-Jacques, and Roscosmos’ Oleg Kononenko, will return to Earth on a Soyuz capsule. A month later, on July 20, the station will return to its full six-person capacity with the arrival of Morgan for his long-duration stay, Luca Parmitano from the European Space Agency, and Alexander Skvortsov from Roscosmos. Sometime in July, SpaceX still expects to send up its Demo-2 mission, crewed by astronauts Bob Behnken and Doug Hurley. They will stay for only two weeks, and return home the way they came. They are a key part of SpaceX’s certification and testing program, but they won’t count as Expedition Crew members for the ISS. On September 25, NASA astronaut Jessica Meir and Roscosmos cosmonaut Oleg Skripochka will launch for their missions. They’ll be joined by United Arab Emirates’ Hazzaa Ali Almansoori, flying thanks to Roscosmos, who will be in space for only a brief stay. He’ll head back to Earth on October 2, along with current ISS residents Nick Hague and Alexey Ovchinin. And in February 2020, Parmitano, Skvortsov, and Koch will return to Earth, with Meir, Skripochka, and Morgan following sometime in the spring. Sometime late in 2019, Boeing still plans to fly a crewed test of its Starliner spacecraft, following an uncrewed test flight in August. The crewed flight is now planned to be a long-duration stay of a few months, though the dates are yet to be decided. Initially, like SpaceX’s maiden flight, Boeing's first crewed test was expected to last only a few weeks. Both companies also need to complete a pad abort test and complete their parachute testing, though they’re making progress. Boeing completed their fourth of five parachute tests in March. While the delays have mounted, both companies appear to be nearing the finish line.