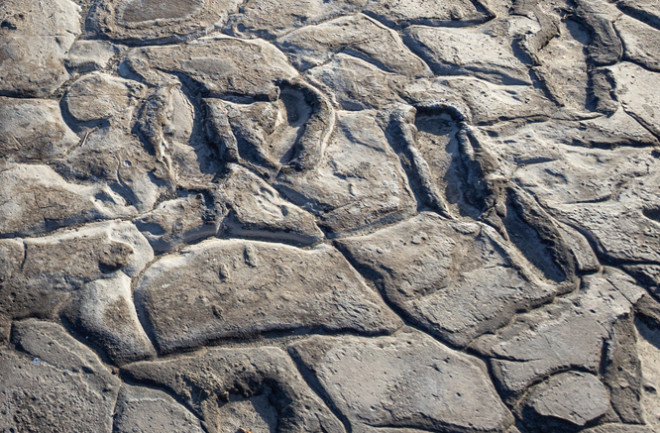 An unknown species of hominin that lived 3.66 million years ago left its only trace of a few dozen footprints in the mud that volcanic ash quickly buried. While these tracks have been known for nearly 50 years, new research reveals that the sets of footprints may belong to two distinct hominins that walked eastern Africa at the same time.

“That is the first, oldest unequivocal evidence for that — two hominins existing at the same place at the same time,” says Ellison McNutt, a biological anthropologist the Ohio University Heritage College of Osteopathic Medicine.

Researchers first discovered the tracks in the 1970s at the Laetoli site in Tanzania. Most reference them as the oldest clear evidence of human ancestors that walked on two feet. The site preserves the footprints of many species like elephants, rabbits and antelopes. And these early discoveries also included several trackways belonging to bipedal creatures.

One group of tracks, a 1978 discovery known as site G, is attributed to at least three individuals of Australopithecus afarensis — the same species to which Lucy belongs. Another group, a more recent discovery known as site S, has two individuals who also belong to Lucy’s species. But a group discovery at site A in 1976 also preserves a bipedal trackway from one individual significantly different from those at sites G or S. The footprints at site A are the subject of a study published recently in Nature, which McNutt led.

Researchers know that all these animals, including the hominins that walked in all these groups, date to roughly the same period. Based on the sediment samples, it appears one eruption buried the ground in a layer of volcanic ash. Sometime after the first eruption, several hominins and several animals passed through muddy material in the Laetoli area, which then dried in a relatively short period of time. Saving the prints from subsequent erosion, another eruption buried the whole series of footprints in a fresh layer of ash. This happened between a few days to a few months, preserving a perfect snapshot of who passed through the area during that period.

After site A’s discovery, some early researchers doubted the hominin origin of the trackway. Some researchers initially believed there was only one hominin species in one place at one time. The tracks at Laetoli site G seemed to match well with other evidence of A. afarensis, and those at site A were notably wider than expected for those hominins. Some researchers suggested that the tracks might belong to a bear, another animal capable of walking on two feet with a heel-striking step.

“There [were] bears in Africa at that time,” McNutt says, adding that the species known as Agriotherium africanum, a bear roughly the size of a polar bear or large grizzly, was present in Eastern and Southern Africa at a similar time.

Nonetheless, the theory was far from conclusive, and the lack of further evidence placed the question on the back-burner for decades.

McNutt and her colleagues wanted to revisit this question, but couldn’t find the molds of the prints taken at site A decades earlier. Furthermore, 40 years of seasonal rain possibly destroyed the original trackway that was unmarked. But the team wanted to see if they could find them.

They returned to Tanzania in 2019 and found site A after following clues from descriptions and old maps of the other prints from the original excavations in the 1970s.

Once they uncovered the tracks, McNutt was immediately convinced an ancient bear didn’t leave the bipedal prints. But to be sure, she worked with Benjamin Kilham of the Kilham Bear Center in New Hampshire. The researchers worked with orphaned bears at the center awaiting reintroduction to the wild. They chose juveniles, whose feet roughly matched the size of those bipedal prints at site A, and had them walk upright through a mud track.

The researchers also compared the prints of chimpanzees walking in a bipedal way to the bear prints and to the trackways at Laetoli. They found that, while the prints at site A had relatively wider feet like bears and chimpanzees, the internal proportions were more similar to those found in modern humans and the other Laetoli prints.

Furthermore, the evidence in these five prints shows that the individual was cross-stepping similar to the way models walk on runways. Bears and even chimps don’t have the balance to do this like humans, or our nearer ancestors, because of the shape of their hips and knees. McNutt says the strange pattern could reveal a child playing while walking, or someone slipping or falling. It could even mean the hominin had a unique gait.

Whose Prints Are They?

The prints at site A also don’t match the prints at the other two sites at Laetoli, which researchers think are the A. afarensis. The site A prints have a big toe that sticks out significantly more than the others, and the foot proportions don’t compare well to what researchers assume was a juvenile A. afarensis.

However, these differences aren’t just variations of one flat-footed modern human with big toes and another. McNutt says that the internal shape of the site A prints is as different from those of the other Laetoli prints as modern humans are to the prints of chimpanzees.

There are a few other hominins that existed in East Africa around this time, including Australopithecus deyiremeda and Kenyanthropus platyops. But researchers have not yet unearthed a foot attributed to either of these species, so it’s difficult to say whether the prints at site A belonged to one of them.

The other possibility, McNutt says, is that these prints don’t belong to either of those two species, but rather to something that isn’t yet known.

Researchers plan further excavations at Laetoli to see if more evidence turns up. But for now, based on how volcanic ash preserved the evidence, McNutt and her coauthors are convinced that two hominins walked the same place in eastern Africa at the same time.

“That’s what makes it cool,” she says about the prints and the study.

Neanderthals Were Probably Carnivorous, According To A Fossilized Tooth