Regular readers know that Saturday Morning Breakfast Cereal is one of my favorite web comics. This morning, he had an astronomy-themed bit of snark: 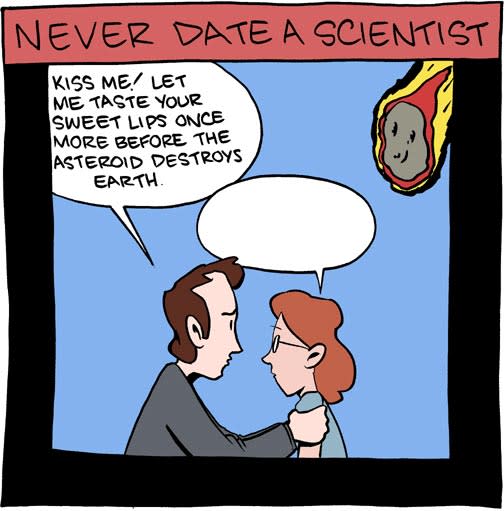 I've blocked out the woman's reply, so you'll have to click through to see the punch line. And I love Zach, the artist, I really do, but... SPOILER for the joke: Meteorites are after they hit the ground. Meteors are when they are still in the air and glowing, and the solid part is called a meteoroid. There is no semantic definition of when a meteoroid is is big enough to be called an asteroid, but given the size depicted in the cartoon, I'd say that one counts. See? This is why you shouldn't date an astronomer. Unless you like that sort of thing. Oh baby! Talk cosmic to me!

Tip o' the Whipple Shield to Brian Carroll who tweeted the link to Rebecca at Skepchick, who is in turn technically correct in her title since I'm married and Mrs. BA can kick anyone else's asteroid herself.