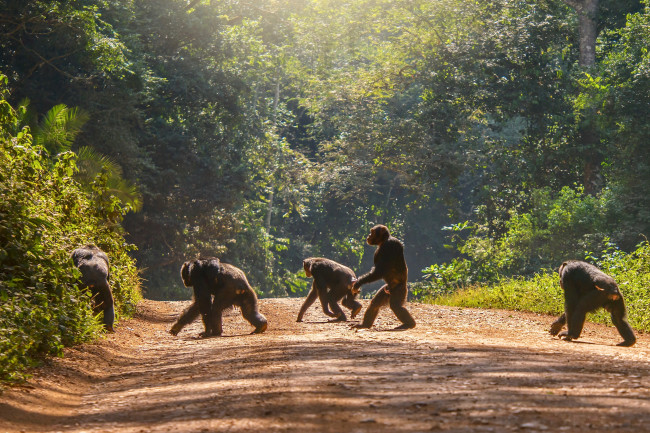 In a cavernous concert hall, before an eager audience of thousands, Masatoshi Nei is experiencing a technical glitch.

The biologist has just received Japan’s prestigious Kyoto Prize in Basic Sciences, honoring his groundbreaking exploration of evolution on a molecular level. The eyes and ears of international media, diplomats and dignitaries, including Japan’s Princess Takamado, are trained on the soft-spoken 82-year-old as he delivers his acceptance speech.Or tries to. On a massive screen above him, a slide show advances and retreats randomly as Nei attempts to present techniques he pioneered that have revolutionized his field — and theories that challenge some of its most deeply rooted ideas.

“So sorry,” Nei tells his audience with an endearing chuckle. “I’m always pursuing the theory, not the practical.”

Practicality has been, however, a guiding force throughout Nei’s career, from his early agricultural research to his decades-long quest to move evolutionary biology away from subjective field observations and into objective, math-based analysis on a molecular level. In 1972, he devised a now widely used formula, Nei’s standard genetic distance, which compares key genes of different populations to estimate how long ago the groups diverged. In the early ’90s, Nei was a co-developer of free software that creates evolutionary trees based on genetic data. Two decades later, Molecular Evolutionary Genetics Analysis, or MEGA, remains one of the most widely used and cited computer programs in biology. 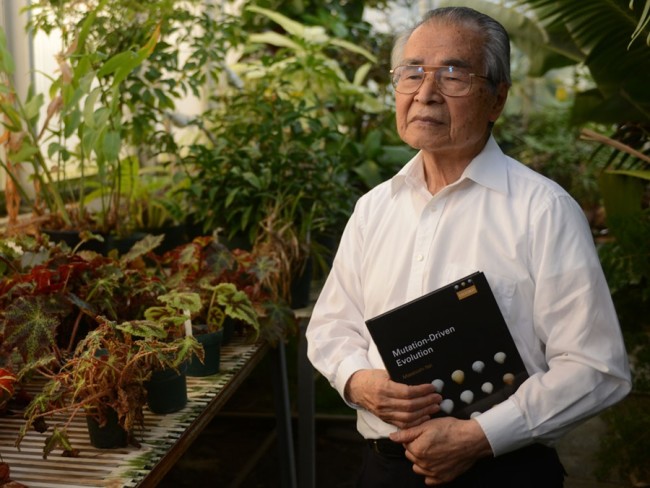 But it’s his natural selection-busting theory, which Nei developed in the ’80s and expanded on in the 2013 book Mutation-Driven Evolution, that the researcher wants to see embraced, cited and taught in schools.

A few days after his presentation slides finally cooperated, Nei, director of the Institute of Molecular Evolutionary Genetics at Pennsylvania State University, spoke with Discover about where he believes Darwin went wrong.

Discover: You began your academic career in Japan in the ’50s as an assistant professor of agricultural science. How did you, no pun intended, evolve into a molecular biologist taking on Darwin?

Masatoshi Nei: I wanted to make population genetics useful and practical, so I went into plant breeding. But I started to ask, why does phenotopic [observable trait-based] evolution take place? I was interested in it on a genetic level. Charles Darwin said evolution occurs by natural selection in the presence of continuous variation, but he never proved the occurrence of natural selection in nature. He argued that, but he didn’t present strong evidence.

But among the people working on evolution, most of them still believe natural selection is the driving force.

OK, so, explain how. 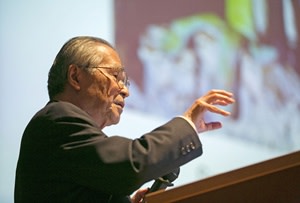 Nei makes a case for mutation-driven evolution at the 2013 Kyoto Prize awards ceremony. The Inamori Foundation

MN: Every part of our body is controlled by molecules, so you have to explain on a molecular level. That is the real mechanism of evolution, how molecules change. They change through mutation. Mutation means a change in DNA through, for example, substitution or insertion [of nucleotides]. First you have to have change, and then natural selection may operate or may not operate. I say mutation is the most important, driving force of evolution. Natural selection occurs sometimes, of course, because some types of variations are better than others, but mutation created the different types. Natural selection is secondary.

Someone on the outside looking in at the debate might say you and other researchers are splitting hairs, that both mutation and natural selection drive evolution. How do you respond?

In neo-Darwinism, evolution is a process of increasing fitness [in the sense of an organism’s ability both to survive and to reproduce]. In mutation-driven evolutionary theory, evolution is a process of increasing or decreasing an organism’s complexity. We tend to believe natural selection selects one type. But there are many types, and still they’re OK. They can survive, no problem.

For example, if blue eyes are better for some reason in Scandinavia, that mutation has a selected advantage, and then of course that advantage will occur more in that population. But first you have to have the mutation. And natural selection itself is not so clear. In certain cases it is, but not always. The gene frequency of blue eyes may have increased by chance, too, rather than natural selection. The blue eye color may be just as good as green. Both can see.

In 1968, your friend and mentor Motoo Kimura proposed the neutral theory of molecular evolution, arguing that most mutations that occur have neither advantageous nor deleterious consequences for an organism. How did you take neutral theory a step further with mutation-driven evolutionary theory?

MN: Kimura believed morphology [appearance] evolves through natural selection. He applied neutral theory only on a molecular level. I say it can determine morphological characteristics as well because DNA determines everything, but to prove this has not been so easy. [Laughs.] Forty or 50 years later, I am still trying to prove it.

One of your most significant contributions to the field is Nei’s standard genetic distance, a formula that determines when different populations diverged based on mathematical analysis of their genomes. But this formula assumes the rate of genetic change is constant. Do you think human activity — from overfishing to burning fossil fuels to illuminating our cities and highways with artificial light — could be speeding up the rate of mutation?

MN: I think there is a mutagenic element to human activity, but it’s difficult to gather proof. It’s occurred only in, say, the past 10,000 years, and I don’t know if it’s changing the rate of mutation. You can identify how many different mutations occurred, but not always how.

You’ve been talking about mutation-driven evolution for more than three decades. Why do you think the majority of evolutionary biologists remain in the natural selection camp?

MN: I expressed this simple view first in 1975 in my book Molecular Population Genetics and Evolution, and in 1987 in a chapter in another book, but no one changed their views or the textbooks. Of course, at that time, molecular biology had not developed too far yet, and traditional evolutionary biology only considered morphology, not how the variation occurred.

Some birds, for example, have a variant of hemoglobin that allows them to fly over the Himalayas, at very high altitudes. Some alligators have a different variant of hemoglobin that allows them to stay submerged for a very long time. This has been known for a while and everyone felt, well, variation exists in the populations, but the condition necessary must be just natural selection.

In 1987, you co-authored a paper with Naruya Saitou describing the neighbor-joining method, a novel algorithm for creating evolutionary trees by working backward based on key genetic differences between related species, the idea being the more recently one species diverged from another, the more similar their DNA will be. It’s been cited more than 34,000 times over the years and has become a cornerstone of molecular evolutionary biology research. Why do you feel it was so influential? 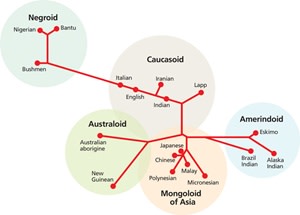 The neighbor-joining method allows scientists to calculate when different species, or variations within a species, diverged by analyzing differences on a molecular level. Based on a 2002 study, this illustration maps the relationships between 18 human populations, using the neighbor-joining method to create an evolutionary tree built on genetic data. Alison Mackey/Discover after Jason Spatola via Wikimedia Commons

MN: It’s simple. [Laughs.] I had developed the genetic distance theory [in the ’70s] because I wanted to make a phylogenetic tree, and distance can be used for making trees. But I was also interested in statistics. So I combined the two methods. To test it, first we did computer simulations: We generated a DNA sequence for an evolutionary tree where we already knew where the tree branched. Then we used statistics, the neighbor-joining method, to reconstruct the tree and test whether it resembled the actual phylogenetic tree. It did, and that’s how we knew this method gave a pretty good idea of how species evolved and diverged.

At first, other biologists were fanaticists about sticking to earlier methods of calculating relationships between species. There were a lot of stupid fights in the ’80s, but I insisted it would work. In the case of, say, using 100 genetic sequences, we can make a neighbor-joining tree within a few seconds. With the regular method, it would take months. And after working for months, the result was almost always the same as the neighbor-joining method.

You’ve stated on a number of occasions that you’re ready for a lot of criticism over your most recent book, 2013’s Mutation-Driven Evolution. Why?

MN: I presented such views in my 1987 book Molecular Evolutionary Genetics, but people didn’t pay attention. Textbooks on evolution haven’t changed: They still say natural selection causes evolution. My views were totally ignored. In that book, I discussed many statistical techniques, and only in the last chapter did I discuss the problem of natural selection not being proven. The chapter did not convince a lot of people, I think, because they already had a preconceived notion that natural selection must be the driving force because Darwin said so. Darwin is a god in evolution, so you can’t criticize Darwin. If you do, you’re branded as arrogant.

But any time a scientific theory is treated like dogma, you have to question it. The dogma of natural selection has existed a long time. Most people have not questioned it. Most textbooks still state this is so. Most students are educated with these books.

You have to question dogma. Use common sense. You have to think for yourself, without preconceptions. That is what’s important in science.

[This article originally appeared in print as "We Are All Mutants."]