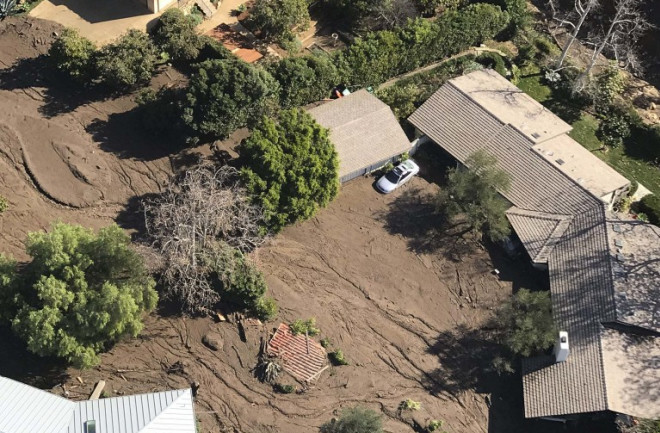 Sediment from January mudflows burying cars and homes in Montecito, California, seen on January 10, 2018. California National Guard/Flickr. This week has been a tragic one for parts of Southern California. Heavy rains have triggered landslides and mudflows that have killed over 17 people with dozens more missing. Now, this tragedy is a sequel to an earlier disaster: Wildfires ravaged the coastal mountains near Santa Barbara. However, they are two events that tend to go together because the effects of one prompt the other. The wildfires that burned forests and homes in 2017 have the net impact of destabilizing rugged terrain like is found in towns like Montecito, where numerous mudflows have struck. As vegetation is burned - both trees and ground plants - the soil is exposed to rain water (or snow melt, in other places). The soil absorbs the water, but instead of having plant roots to keep much of that soil in place, it becomes a slurry that's vulnerable to the force of gravity. The material can move downhill into stream and river channels. It can also cause whole hillsides to become unstable and create landslides that move debris into valleys and, again, into rivers and streams. They can occur with little-to-no warning after rainstorms, so getting people out of their path is challenging (more on that below).

This crumbled car shows the force of the mudslide as debris roared through Montecito. pic.twitter.com/xj2VZ2fPUU

All this soil, rock, burned trees and whatever else is caught up in the water-logged flow then moves downhill at speeds that might reach tens of kilometers per hour. This isn't like a muddy river, however. Much like volcanic mudflows (lahars), these mudflows carry so much material that they have the strength to destroy homes and cars in their path

. If you have any question about that, check out the images of what happens to cars during these mudflows (above and below) -- they end up barely recognizable as vehicles.

This is what floodwaters and mud can do. That’s the remnants of a car in Montecito, CA pic.twitter.com/S0CNVEbTqM

They have the consistency and density of wet cement, so if you can imagine trying to escape from a river full of such material, you can see what mudflows can be so deadly. Once the mudflow has come to a rest, it tends to separate and lose its water, both trapping victims and creating floods in low areas where the flow stops, usually due to the slopes flattening out.

for the Montecito mudflows (see above). You can clearly see the hills above the town where wildfires destroyed vegetation (light brown, relative to the greener hills to the left). Landslides in the hills fed debris into streams that then rushed into the town below and the brown debris can be seen in and around those river channels. If you happen to live near these streams or were near them when the mudflows came barreling down the channel, things were not good for you. For California, the question now becomes one of both rebuilding after these mudflows and protecting people from further mudflows. Volcanic mudflows are some of the deadliest hazards associated with volcanoes, so mitigating against those types of debris flows has been a focus for decades. Some cities near volcanoes have built special channels to help keep lahars

confined to channels, but that comes at great expense. Other places such as the towns downhill from Mt. Rainier in Washington have employed early warning systems

, where mudflows far uphill trigger alerts to citizens below. There is concern that the people of Montecito did not get or heed these warnings

when the mudflows roared through their town in the early morning hours. Officials estimate that only 10-15 percent of the population evacuated after a voluntary order was issued for concern of mudflows — and even after being warned for days

beforehand of the risk. This is yet another tragic example of how to communicate risk to the general population. It is possible that people just didn't understand the high level of danger regarding the potential for mudflows or maybe they suffered from "disaster fatigue" after the summer and fall of wildfires. Rescue crews are still looking for survivors

from the mudflows, but even if they are found, extracting them from the mud can be very difficult (as we learned during the 1985 eruption of Nevado del Ruiz in Colombia

). With the high likelihood of more mudflows in Montecito and in other towns near areas damaged by the 2017 wildfires, this question becomes of great concern to prevent more deaths.