Scientists gain a new glimpse into a billions-of-years-old event in the universe that allowed light to shine freely. 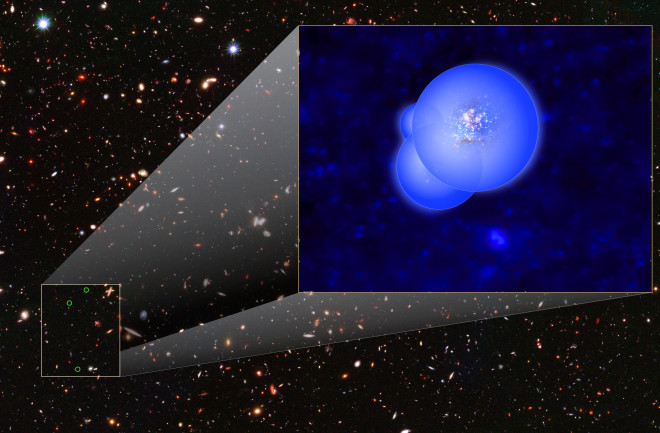 About 13 billion years ago, the universe emerged from a period of darkness, ushering in a cosmic dawn. As galaxies lit up with stars, they changed the chemical composition of their surroundings, allowing light to shine clearly throughout the universe.

Looking in on that period is difficult. But with telescopes that can peer billions of light-years away — and, therefore, back billions of years in time — scientists are getting a better idea of what the universe’s early days looked like.

In research highlighted Sunday at the 235th meeting of the American Astronomical Society, astronomers led by Vithal Tilvi at Arizona State University have spotted the most distant group of galaxies ever found. These young, bright objects are in the act of clearing away the fog of the early universe, showing astronomers just how the transition from darkness to light came about.

The work has been submitted to The Astrophysical Journal and is available on the preprint website arXiv.

During the universe’s so-called “dark ages,” which began about half a billion years after the Big Bang, the abundant hydrogen that fills the cosmos was neutral (containing a proton and electron).

Neutral hydrogen scatters light like headlights in fog, so a universe filled with it is difficult to peer through. As the first galaxies formed stars, those young, bright suns began to emit energetic light. Their light ionized the hydrogen around them, knocking away electrons. Ionized hydrogen no longer scatters light, so by about 1 billion years after the Big Bang the fog had been cleared and light could travel freely.

“It’s somewhat akin to a frozen lake melting in the spring: The material is there, it’s the same set of atoms, but they’ve changed their physical conditions,” said team member James Rhoads of NASA’s Goddard Space Flight Center, during a press conference. “They’ve changed their properties in a way that hasn’t gone back in the subsequent 13 billion years."

Although astronomers have made progress in understanding this transition, called reionization, they have yet to decipher how exactly it occurred.

According to simulations, early galaxies ionized their environment in bubbles that ballooned and connected until the entire universe had been ionized. But those simulations offer several possible ways that reionization could have progressed.

To find out which scenario is correct, the team used the National Optical Astronomy Observatory’s Extremely Wide Field Infrared Imager, or NEWFIRM, on the 4-meter Mayall Telescope on Kitt Peak to search for a specific wavelength of light. Called Lyman-alpha, it is produced by young galaxies and stars. Although the light is emitted in ultraviolet wavelengths, it has been redshifted, or stretched, over time. Astronomers today must search for it as infrared light. And any early galaxies that popped up in the survey must have already ionized enough of their surroundings to let their Lyman-alpha light shine through, rather than scattering away.

The team spotted three distant galaxies that matched what they were looking for. Together, they form a galaxy group called EGS77. It is the most distant group of galaxies ever seen. Because looking at faraway galaxies is like looking back in time, astronomers are seeing EGS77 as it appeared about 680 million years after the Big Bang, when the universe was just 5 percent its current age.

Each galaxy is blowing a bubble of ionized hydrogen about 2 million to 3 million light-years across, which is large enough that light can escape freely from the region.

What’s more, the bubbles are so big that they overlap, creating a larger, single region of space filled with ionized hydrogen around the group.

EGS77 is the first galaxy group caught in the process of reionization. The finding opens the door to a better understanding of this vital yet difficult-to-see transition in the early universe.

“Reionization was the last time that anything interesting happened in the life of a typical hydrogen atom, and it’s important to understand that history,” Rhoads said. “And if you look at how many galaxies there are where you see Lyman-alpha, you can start to do a census of what part of the universe must be ionized. So, what we do by doing this at different epochs of cosmic history is to map out the progress of reionization.”

That will ultimately help astronomers reveal exactly how the first stars and galaxies turned on, and with their light forever changed the cosmos.