How hundreds of tornadoes led one man to seek communication improvements amidst deadly weather events. 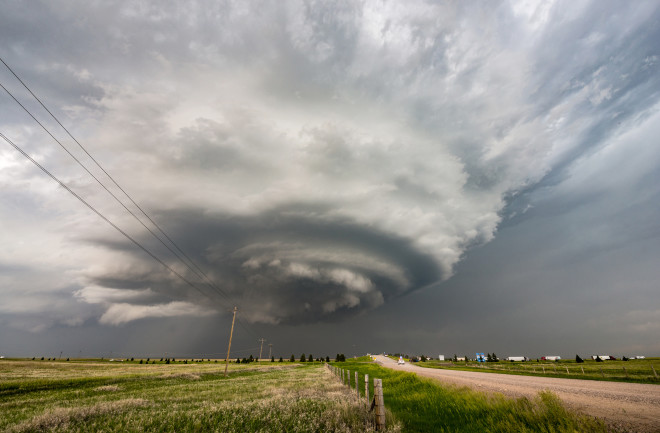 A devastating outbreak of hundreds of tornadoes led veteran meteorologist James Spann to wonder how to better communicate the risk of deadly weather. (Credit: Cammie Czuchnicki/Shutterstock)

April 25, 2011, was the beginning of a four-day “super-outbreak” of tornadoes that rampaged across the southeastern U.S., smashing both property and weather records as it went, and leaving an estimated 321 people dead.

All in all, 376 tornadoes touched down during the outbreak, 226 of them on April 27 alone. Three of the storms were EF-5s (the highest rating on the Enhanced Fujita Scale, used to rate the intensity of tornadoes), with winds over 200 miles per hour. Another 33 were EF-4s or EF-3s. The costliest of the monsters was a mile and a half wide — about the length of 22 football fields. The four-day event ranks as one of the deadliest weather disasters on record.

The storms were violent, and in many cases unprecedented. They were not, however, unexpected. The event had been forecast days in advance. In the midst of the outbreak, despite storms racing in like hornets pouring from a disturbed nest, the National Weather Service warnings averaged almost a half-hour lead-time, giving people sufficient time to take cover. Yet hundreds of people still didn’t make it to shelter.

“The death toll just shook me to the core,” says James Spann, a broadcast meteorologist at a television station in Birmingham, Alabama. His market covers a large part of the state, the hardest hit in the April 2011 outbreak. “What we learned on that day is that what we do is just not enough,” says Spann.

The problem was not with the science. Meteorologists did a remarkable job with the science during and leading up to the outbreak. The problem was communication: how to frame risk so that people would respond appropriately. “We don’t know anything about human behavior,” says Spann. “So we went to the social scientists after that event, these wonderful people who do understand human behavior.”

When Kim Klockow-Mcclain chose her dissertation topic for a Ph.D. in geography, she proposed a series of experiments about how people naturally read uncertainty into warning information by using rules of thumb — for example, how far they are from a hazard. Then she explored how providing people with the underlying likelihood of a tornado would change those instinctual reactions. It was an interdisciplinary approach, combining geography and meteorology with psychology. The concept was solid. But her dissertation committee wondered if those findings would translate into real life.

“In my experiments,” Klockow-McClain explains, “I would make the choices people had to make really simple, and choices that they only had to make one time. But in the real world, people do various things over time, and have a lot to think about. If I hadn’t studied how people receive, understand, and respond to tornado forecasts and warnings in the real world, how could I really know what might change with new probabilistic information?” The committee gave her the go-ahead do her planned experiments, but they encouraged her to get out in the field, too. This was December of 2010. Klockow-McClain recalls, “One member of my committee said, ‘If any interesting tornado events happen in 2011, you should do some fieldwork and explore this area a little bit more.’ ” Nature gave her more to research than they could have imagined.

“What began as a study that aimed to explore the ways people process risk became a window for our whole field into the single deadliest tornado outbreak in decades,” she says. “Everyone wanted to know what had happened. I had the right questions and protocol ready to go when the event happened to help them understand.”

This interdisciplinary approach was new, but it was an idea whose time had come. In 2018, Klockow-McClain, by then a research scientist with the Cooperative Institute for Severe and High-Impact Weather Research and Operations at the University of Oklahoma, founded the Behavioral Insights Unit at the National Oceanic and Atmospheric Administration’s National Severe Storms Laboratory. In the past, she says, meteorology was focused on technological advances, such as improved radar, expecting that better forecasting would save lives from these monster storms. The Behavioral Insights Unit is using the social sciences to do that.

Not only was better forecasting not enough, it sometimes backfired. Catching every potential storm can lead to too many warnings, creating an unintentional “boy who cried wolf ” effect. And that can lead to complacency. “We have so much severe weather activity that a lot of people become apathetic to it,” says David Barnes, director of emergency management of Oklahoma County, Oklahoma, no stranger to nasty storms.

The results of Klockow-McClain’s dissertation research showed that most of the time, people do

take these warnings seriously, but their biases may lead them to underestimate their personal risk. People often rely on “folk science” to make decisions about when to seek shelter. When interviewing survivors of the 2011 storms in Mississippi and Alabama, Klockow-McClain found that people often believed tornadoes would not cross water or that hills or mountains would deflect storms. A tornado survivor in Florence, Alabama, told Klockow-McClain that when he heard storms were coming, he thought, “Hopefully there’s some hills between here and there that will kill that tornado.”

Part of the solution to this problem may be education. Klockow-McClain is a big proponent of teaching broadcasters about specific cues that audiences look for to inform their decision making. “We’re helping them tell the weather story with a little more detail,” she says. This includes helping broadcasters develop tools to better describe how severe weather situations are unfolding and offer more nuance to their on-air warnings, such as which storms are most likely to become severe or produce tornadoes.

Forecasters at the National Weather Service develop new methodologies to aid in the next generation of severe weather warnings.

Part of the solution to this problem may be education. Klockow-McClain is a big proponent of teaching broadcasters about specific cues that audiences look for to inform their decision making. “We’re helping them tell the weather story with a little more detail,” she says. This includes helping broadcasters develop tools to better describe how severe weather situations are unfolding and offer more nuance to their on-air warnings, such as which storms are most likely to become severe or produce tornadoes.

She also points out that in the past meteorologists tended to simply tell the public when and what to do. That approach didn’t work well. “I found that most people aren’t just blindly responding. They’re really trying to understand what’s going on,” she says. “We’re trying to get people to where they feel like they’re in control and know what to do. It’s not enough to communicate about the hazard. We really have to give people the information they need to know how and when to take action.”

Conveying that information can be difficult, though. Barnes finds that people are interested in the science of meteorology — why storms develop, what conditions are conducive to storms. However, when it comes to grasping the probabilities — the statistical likelihood a storm will pose a significant risk to them personally — most people hit a wall. “We’re trying to find ways that convey probabilistic information in a sensical way. For example, we might say things like, the risk for you is 10 times higher than on a typical May day,” Klockow-McClain says.

Probability is difficult for the public; communication is not. In 2011, social scientists told Spann that when it came to storm warnings, he was not even using his greatest resource. “I thought they were talking about radar or something like that,” says Spann, “but they said ‘people.’ ” That led to a regional campaign called Be the Hero. People following storm coverage on television or social networks are urged to get in touch with friends and neighbors who may not have heard the warnings. “People have really responded to that call,” he says.

The interdisciplinary approach seems to be working. A little after 10:30 on the evening of Jan. 25, 2021, an EF-3 tornado completely destroyed the Fultondale, Alabama, home of Jason Williams. He flipped on the television just in time to hear James Spann telling Fultondale residents to get to their safe places right away. Williams awakened his family, grabbed the dog and cat, and the family headed for the basement. When the power went off seconds later, Jason started back up the stairs to get a flashlight. That’s when the roof of the house lifted off. “Everything came crashing down,” he recalls. Everyone escaped with only minor cuts and bruises. Heeding the warning saved their lives.

The improvements are welcomed, but still not enough. A March 2021 tornado took the lives of five people in rural Alabama. Then in December 2021, a chain of tornadoes and severe thunderstorms raced across eight states from Arkansas to Illinois, leaving more than 85 people dead. In both cases, the lead time was adequate. But rural areas pose additional challenges, including the fact that many rural residents live in mobile homes. Research has shown that the safest place to be during a tornado is a basement or an inside room without windows. A mobile home, however, offers no protection. Mobile-home dwellers must make the difficult decision of when to leave home for a local shelter — balancing the inconvenience of getting to the shelter

too early with the risk of leaving too late. Meteorologists are working to be sure the word gets out to non-English speakers as well.

“I still grieve every day for the people who died April 27. They died on my watch,” says Spann. “But we used that to work with the social scientists and improve. Still, we’ve got a long way to go.”