Up until the 1700s, medical practitioners would use mummy remains to treat coughs, lower-back pain, heal wounds and more. 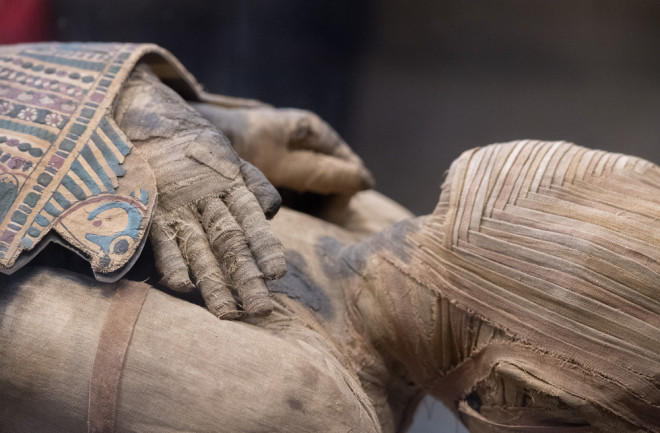 In 1823, someone gifted an Egyptian mummy to a Harvard surgeon. The surgeon initially wondered if the mummy was real, or one of the counterfeits he had heard about. But after cutting into the top cloth, the well-preserved head assured him. The teeth were perfectly intact and the surgeon could tell the person’s hair had once been reddish-brown. Feeling like an intruder, the surgeon re-wrapped the mummy to let it rest in peace.

If it had been a century prior, the surgeon might have treated the mummy differently. From the 11th century into the early 1700s, medical practitioners used “mummy medicine” to treat a variety of ailments. They believed munching on mummies was the cure.

Tomb raiders in the 12th century who looked for loot would unwrap Egyptian mummies, hoping for jewels or other valuables. They noticed a black substance on the bodies, which they assumed was bitumen from the Red Sea. And that had the potential to be just as lucrative.

European apothecaries were eager to use mummy-derived bitumen. They used it to treat a variety of ailments. Topically, they dosed it into eyes with cataracts or onto skin with lesions. When mixed with wine, it was supposedly good for coughs and shortness of breath. When stirred with vinegar, it soothed lower-back pain. A mix of mint, myrrh and bitumen was meant to relieve quartan fever (a type of malaria). And when added to plaster, the mummy medicine helped heal wounds and broken bones.

Bitumen, which we now call asphalt, is a naturally occurring form of petroleum. It was thought to have healing properties, but it was difficult to find and considered rare. The black substance on mummies, however, was not bitumen. The mummies were well over a 1,000 years-old, and the discoloration was likely from age. The embalming materials, as well as the natural seepage of blood and spinal fluid, could have also created the discoloration.

But, people thought it was bitumen and business boomed. By the 1400s, people developed a trade system for robbing tombs, extracting the so-called bitumen and sold it to European suckers for a hefty price. One robber admitted to Egyptian authorities that he removed the bodies from the tombs, boiled them, and the collected the oil that bubbled to the surface. He sold the extract for 25 gold pieces to European merchants.

There were plenty of mummies at the time to keep tomb raiders busy. By the Ptolemaic period (332 B.C. and on), commoners could perform mummification. The more money a person had in life, the better their mummification in death. They did not preserve all mummies using the same standards, though.

While apothecaries liked to mix bitumen into recipes, some healers liked to take their mummy medication straight.

In the early 1500s, Italian surgeon Jacopo Berengario da Carpi came from a family who had healed for generations. They passed down a recipe for medical plasters that included mummy bits. They were strict about keeping the exact formula a secret, and they also kept several mummified heads on hand so they wouldn’t run out of their key ingredient.

Eventually, medical practitioners had trouble securing Egyptian mummies as demand outpaced supply. Some tried to work with corpses that were desiccated in the sands of North Africa. Others turned to mummies from the Guanche people of the Canary Islands. Some, like one French physician, even experimented with the bodies of freshly executed prisoners.

The practice fell out of favor in Europe in the 18th century as medicine shifted away from medical cannibalism, an ancient practice that involved eating flesh, drinking blood or consuming ground bones to cure various ailments. Even though kings and commoners all took part in medical cannibalism, the topic soon became taboo. And European missionaries and colonists used cannibalism to justify occupying foreign lands. The fact that Europeans had fed on flesh and chugged blood for half a millennia was conveniently forgotten.