Massive Landslide inside the Askja Caldera 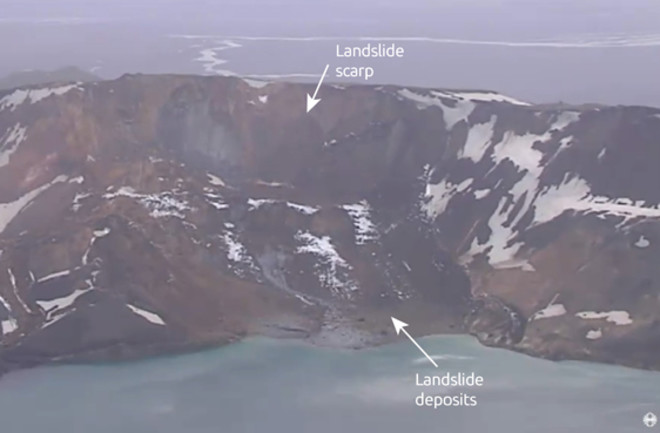 Deposits and scarp from the July 21, 2014 landslide in the Askja caldera, Iceland. Photo by Capture from RUV.is video. Most volcanoes are inherently unstable features. They are constructed of loose piles of volcanic debris (tephra) and lava flows on relatively steep slopes. This means that they can be prone to landslides. This is especially so inside calderas, a depression formed by the collapse of the land surface. The inner slopes are usually steep and crumbly, leading to the formation of weakened zones along the edges of the caldera. Landslides, triggered by earthquakes or merely due to gravitational forces on the slopes, can then happen, sending debris into the caldera. If its filled with water, then you can even get tsunamis within the caldera itself. It appears that just such a large landslide occurred on July 21, 2014 at Iceland's Askja (see above). The Askja caldera was formed during an eruption in 1875 and now a small lake sits in part of the volcanic depression. According to the Icelandic Meteorological Office report, the landslide at Askja was big enough to produce a tsunami in the caldera that filled the small Viti crater with lake water. The scarp from the landslide is impressive, showing a wide and tall part of the caldera's slope removed and deposited in and along the caldera lake. Check out the RUV overflight video of landslide to get a sense of just how big it was. Some rough estimates of the landslide from early information suggest it might be 50-60 million cubic meters of material and the tsunami inside the caldera could have been 50 meters. These large landslides are found at other caldera's as well. At Crater Lake in Oregon, Chaski Slide (see below) on the eastern side of the caldera is a landslide deposits that runs to the middle of the ~6.5 kilometer wide caldera. Parts of the walls of the caldera that moved are still visible above the lake waters, but most of the debris, including car-sized chunks, made it to the bottom of the calderas. The slide deposit is likely at least 7,500 years old, so it formed within a few hundred years after the eruption that created the caldera at Crater Lake (~7,700 years before present).

Bathymetry of Crater Lake's floor, with Chaski Slide shown on the left. Illustration by USGS. All of this action at Askja appears to have happened unrelated to any eruption or earthquake activity, although the IMO did post a picture of a mysterious plume that was spotted at Askja on July 21 just after the landslide likely occurred. Likely this is dust and possibly steam related to the landslide.