Mars as big as the Moon: it's baaaaack

Like a cold sore, a relative who won't leave, or American Idol, the unwelcome "Mars is as big as the Moon" email is back once again to send nonsense into your mailbox. First, the offending mail:

27th Aug the Whole World is waiting for............. Planet Mars will be the brightest in the night sky starting August. It will look as large as the full moon to the naked eye. This will cultivate on Aug. 27 when Mars comes within 34.65M miles off earth. Be sure to watch the sky on Aug. 27 12:30 am. It will look like the earth has 2 moons. The next time Mars may come this close is in 2287. Share this with your friends as NO ONE ALIVE TODAY will ever see it again.

Now, the trashing: THIS EMAIL IS NOT TRUE. It's baloney, wrong, a lie, a con, a hoax, a joke, a falsehood. Now, the specifics: Oh, just go here and read about the last time I debunked this. Or the time before that. Or the time before that, or before that, or the original time back in 2000 and freakin' 3. Criminy. Look folks, Mars is on the other side of the Sun right now. On the date indicated in the email (Aug. 27), it'll be 360 million kilometers (about 215 million miles) from Earth. At its closest, Mars gets about 56 million kilometers (35 million miles) from the Earth, so this email is way, way off. Once again, like all the others before it (and all the ones to come, no doubt), they just keep replacing the date from last year's hoax with the current date. In this version, though, there are two new things that I love for their ever-increasing dumbosity. One is that the term is "culminate", not "cultivate". We're not reaping Mars. The other is the attached picture. It's not Mars and the Moon. It's two moons of Saturn. See the weird band shape along the bottom of the picture? Those are Saturn's rings! This picture was taken by Cassini, the spacecraft orbiting the ringed giant world, currently well over 1.5 billion kilometers away. So once again the bar has been lowered by email hoaxers. And still, I have to wonder, how many people will be fooled by it? Tip o' the spam filter to BABloggee David Roberts for being the first to send this to me. 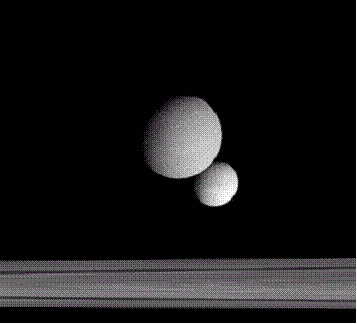