A planet with supersonic winds, where a day lasts a year 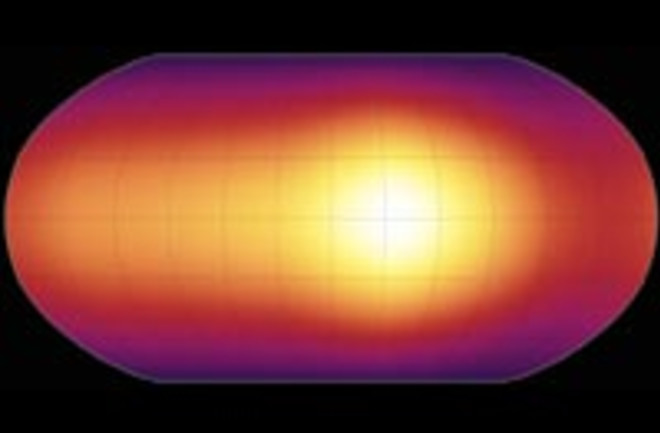 The first-ever map of the surface of an exoplanet, or a planet beyond our solar system. (Credit: NASA/JPL-Caltech//Harvard-Smithsonian CfA)

Using infrared images recorded by NASA’s Spitzer Space Telescope, astronomers have created the first weather map of a planet outside our solar system. Only 60 light-years away in the constellation Vulpecula, planet HD 189733b is the closest known neighbor with an orbit that brings it directly between its star and Earth. The map was created from a composite of 278,528 images recorded by Spitzer’s infrared-array camera over a 33-hour stretch.

If they existed, weather forecasters on planet HD 189733b would have it easy. The temperature does not change much: highs around 1700 degrees Fahrenheit, lows near 1200, and winds eight times faster than the speed of sound on Earth.

This alien world is so close to its star that a year—one orbit—takes only 53 hours. Like other close orbiters, planet HD 189733b takes as long to complete a turn on its axis as it does to finish its orbit. Thus the same side of the planet always faces the sun, absorbing the full force of its heat. As a result, the planet’s day is the same length as its year. The center of the map marks the place where the sun is always directly overhead.

The sun may be shining right on the center of the map, but the hottest locale on the planet is actually located about 30 degrees east. The map’s creators say that the surprising discrepancy provides strong evidence of supersonic winds that blast heat around the planet. The temperature at HD 189733b’s hot spot might reach as high as 1700 degrees Fahrenheit, about the melting point of silver and roughly the same temperature as the furnaces used to cremate human remains. And the days are endless—night exists only on the other side of the planet.

Even though the other side of planet HD 189733b is perpetual night, it’s not much cooler in the shade. Temperatures on the nightside dip only as low as about 1200 degrees Fahrenheit. While a 500-degree difference is significant on Earth, for a gaseous “hot Jupiter”-type planet it’s remarkably small. The planet’s surprisingly limited range of temperatures provides further evidence of strong winds.

One might expect the coldest spot on the planet to be the darkest—or at least farthest from the hot spot. Neither is true. Unlike the hot spot, which is shifted east, the coldest spot lies 30 degrees west of its expected location. “It’s a little weird that the hot spot and the cold spot are shifted in different directions,” says Heather Knutson, one of the Harvard University astronomers who produced the map. “There may be winds going in different directions.”

6 But No Chance of Rain

In addition to its high winds and searing temperatures, HD 189733b is also remarkable for what it doesn’t have. Spectrographic analysis suggests the atmosphere lacks water, carbon dioxide, and methane. This contradicts predictions, because massive planets are thought to have makeups similar to their stars, and HD 189733b’s star is rich in hydrogen, oxygen, and carbon. Regardless, it means no rain.