Making Medicines from Soil: Going Behind the Scenes of a Citizen Science Project 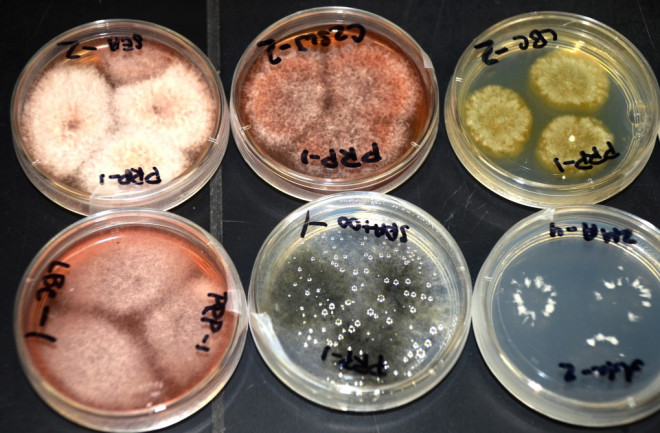 Making Medicines from Soil (Image Credit: C Coker, Cichewicz Lab) Taking you behind the scenes and into the laboratory of the Citizen Science Soil Collection Program

This is a guest post by Dr Robert H. Cichewicz a professor at the University of Oklahoma and leader of the Citizen Science Soil Collection Program. Dr Cichewicz previously wrote on SciStarter about how you can participate in this project. In this post, he describes what really happens behind the scenes in his laboratory that helps their team discover (with your help!) new compounds from fungi that could prove to be useful in treating diseases. Find germs and microbes intriguing?Check out more microbe themed projects that we've picked out for you at SciStarter!

For millennia, our ancestors turned to the Earth as a source of healing agents to address all manner of illness. For example, the Ebers Papyrus (written in the vicinity of Egypt around 1500 BC) provides hundreds of examples of medicinal plants and minerals used to treat many disease conditions including pain, vomiting, and infections. Fast forward to modern times and we see that the research methods used to study diseases have changed dramatically, but the idea that the Earth is the best source of lifesaving drugs has endured. The philosophy that our planet still holds many secrets to modern ailments is substantiated by a large and growing list of drugs that come from nature. Many of these medicines are made by soil-dwelling bacteria and fungi. Microbes have yielded a wide variety of important compounds (for example penicillin, statins, and cyclosporins originally come from fungi) for treating cancer and infections. But finding these beneficial dirt-dwelling microbes and turning them into life-saving medicines is not a simple task. It requires teams of researchers, as well as help from people such as you. A few weeks ago, I wrote a blog post inviting to you to be a part of this process and become a citizen scientist by sending us a soil sample from your backyard. We have had an overwhelming response to our requests, recieving thousands of samples which we are now processing through in the hope of discovering the next amazing secret that nature holds. You might ask yourself, “What really happens after I send this sample?" or "How long does it actually take for you to discover something from what I send you?". In an attempt to answer some of those questions and tell you what happens behind the scenes, I decided to write this post. Hop on and let me take you on a journey that turns a handful of dirt into a life-saving drug. Step 1: From your yard to our lab The journey begins when you request a free Citizen Science Soil Collection Kit from our lab. After you pick a favorite place in your yard, put a small handful of soil in the collection bag, seal it and drop the packet in your mailbox (we've already paid the return postage for you!). It takes less than 5 minutes, and did I mention it’s free? Step 2: Growing fungi from soil

Soil samples spread on a petri dish to grow fungi (Image Credit: C Coker, Cichewicz Lab) Our hardworking team of students and researchers begin the process of isolating fungi from your sample. Most soils are teeming with several kinds of microbes including fungi – a great source of new and useful drug-like molecules. Even if you cannot see them, there are likely thousands in your sample. We spread the soil on the surface of a petri dish that is filled with a gel infused with fungi-food which include things like soil “tea,” blended-up worms, simple sugars, and ground tomatoes – Yum!. Step 3: Identifying fungal species using DNA sequencing After growing and isolating the fungi in the soil sample, the next step is to identify new species using genetic sequence information. Hidden in vast landscape of the fungus' DNA there is a small stretch of genetic material known as the internal transcribed spacer (ITS). This fungal 'barcode' helps us distinguish between different species, identify new ones or categorize them into a larger group known as genera. It is estimated that somewhere around 5 million different fungi live on Earth, but only about 2% have been identified. Given these odds, you've probably had one or more new kinds of fungi living in your yard all along and never knew it! Thanks to the fantastic response to our outreach, we’ve received hundreds of samples, which is a good thing. But the sheer volume of samples we are dealing with means that growing and identifying fungi might take microbiologists a year or more to get your sample processed. But we won’t keep you in the dark! We will be setting up a fungus photo album so you can see what fungi were isolated from your sample. Check out our website for updates! Step 4: Extracting fungal compounds and testing them in different models of disease

Fungi's favorite food? Why Cheerios of course! (Image Credit: C Coker, Cichewicz Lab) Ultimately, it comes down to the chemistry that each fungus is making to help us determine if it has something ‘good’ that could help treat a disease. We grow the fungi on their favorite food – Cheerios breakfast cereal. As it turns out, Cheerios is not only a great food for toddlers, children, and adults, but fungi really like them too. We place Cheerios in test tubes along with the fungus and let it grow for several weeks allowing it to consume the cereal. The fungus is then extracted to remove its special compounds (the natural products) and these are stored in a freezer for later tesacting. One by one, the fungal compounds are tested for biological activity that might prove useful in a therapeutic setting. For example, we add the compounds to cancer cells to see if we can stop them from dividing or give them to pathogenic bacteria to try and stop their growth. The compounds are also entered into a collection that is tested when new disease targets become available. Growing the fungus and extrting the compounds takes about two months but testing, conducted by our biology team can take as little as a few days or up to years to complete. Step 6: Purifying the compound and finding its chemical structure To figure out what the fungi are making, we grow them in large bags containing Cheerios. We then use chemical techniques to purify the desirable natural product away from all the other compounds in the fungal cells. Chemical structure determination then ensues. This step is rather similar to solving a big puzzle where we try and figure out the chemical makeup of the unknown substance. This is a highly variable step that might take weeks and sometimes many months to complete. Solving the structures of unknown compounds is fun, but it takes a lot of patience and the hard work of chemists in our lab.

Testing natural compounds against disease models in the laboratory (Image Credit: C Coker, Cichewicz Lab) Step 6: Further testing purified natural product We study the biological uses of the compounds, as well as share them with our collaborators, many of whom are pharmacologists trained in cancer and infectious disease biology. We work with a network of great scientists from around the country to try and determine the best use for the many new compounds from the fungi. This step can take years to compete, but the good news is that we have many dedicated scientists ready and excited to test the new and amazing compounds from fungi. It is truly amazing when you consider the lengthy and complex chain of events that unfold once you, a member of our Citizen Scientist Team, takes that first small step of sending in a soil sample. You never know what we may find or where we might find it. Despite all of these uncertainties, there is one thing that is undeniable – without you, we cannot hope to beat diseases like cancer and infections. So do not delay a second longer; request your Citizen Science Soil Collection kit today and join the fight. Or as we like to say, “Get your hands dirty. Make a difference.”