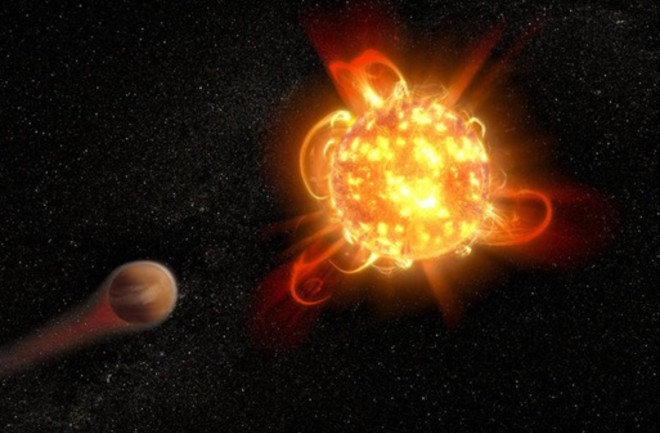 Powerful superflares from young red dwarf stars, like the one shown in this artist's concept, can strip the atmospheres from fledgling planets, spelling disaster for any potential life. (Credit: NASA/ESA/D. Player (STScI)) Red dwarfs are small, slowly burning stars that can live for trillions of years before they run out of fuel. And thanks to their generous lifespans, the planets around them (at least those close enough to stay warm) are often considered prime locations for the development of life. However, new research set for publication in The Astrophysical Journal found that red dwarfs tend to be pretty abusive hosts, at least when they’re young. According to the study, infant red dwarfs emit some of the most formidable superflares ever observed, often erupting with 100 to 1,000 times more energy than their older counterparts. In fact, the flares from these tiny, young stars are so strong that they (pardon the pun) dwarf the average solar flares of our own, much larger Sun — and that’s a problem for any nascent life trying to take root around baby red dwarfs. With the help of the Hubble Space Telescope, the authors of the new study are currently carrying out a survey called HAbitable Zones and M dwarf Activity across Time, or HAZMAT. “The goal of the HAZMAT program is to help understand the habitability of planets around low-mass stars,” said Evgenya Shkolnik, principal investigator of HAZMAT, in a press release. “These low-mass stars are critically important in understanding planetary atmospheres.” Three out of four stars in the Milky Way (and likely the entire cosmos) are red dwarfs, which are commonly referred to as M dwarfs. Because these stars are so abundant, astronomers think that most “habitable” exoplanets — planets that can support liquid water on their surface — likely orbit red dwarf stars. However, hosting liquid water is not the only requirement for life as we know it. We also have to consider incoming bursts of radiation from flares, which, if they’re strong enough, can wreak havoc on the surface of a planet. This is especially true for the planets around red dwarfs, which must sit very near their host stars in order to receive enough heat to be considered habitable. To investigate the overall flare activity of these stars, the HAZMAT project uses far-ultraviolet light to probe red dwarfs that fall into three general age groups: young, intermediate, and old. Though red dwarfs in their first couple hundred million years have long been known to be powerful emitters of ultraviolet light, the exact processes that cause the boosted ultraviolet signals are not yet well understood. If a large percentage of the ultraviolet light coming from young red dwarfs turns out to be due to powerful flares — which occur when magnetic field lines get tangled up and eventually snap within a star — then the atmospheres of any planets around the red dwarfs may be in danger of getting stripped away. This would spell disaster for alien life trying to survive on the fledgling planet’s surface. Using Hubble, the researchers monitored the surfaces of 12 red dwarfs located between 120 and 165 light-years from Earth. In less than a day’s worth of observing time, the team detected 18 flares bursting from the young stars, which are about 40 million years old. Of the 18 flares the researchers detected, 10 of them had energies of over 1023 joules, which is roughly how much energy strikes the surface of the Earth from the Sun over the course of a week. The most powerful flare they observed, dubbed the “Hazflare,” released about 1025 joules of energy, putting it on par with the most energetic flare from the Sun ever recorded. “With the Sun, we have a hundred years of good observations,” said lead author Parke Loyd of Arizona State University. “And in that time, we’ve seen one, maybe two, flares that have an energy approaching that of the Hazflare. In a little less than a day’s worth of Hubble observations of these young stars, we caught the Hazflare, which means that we’re looking at superflares happening every day or even a few times a day.” Although the new findings indicate that planets around young red dwarfs are not very well suited for the development of life, the HAZMAT team is quick to note that the existence of life around these stars is not out of the question. “Flares like we observed have the capacity to strip away the atmosphere from a planet. But that doesn’t necessary mean doom and gloom for life on the planet,” said Loyd. “It just might be different life than we imagine. Or there might be other processes that could replenish the atmosphere of the planet. It’s certainly a harsh environment, but I would hesitate to say that it is a sterile environment.” Plus, even if flares from young red dwarfs are strong enough to stifle the formation of life early on, older red dwarfs may not have the same problem. So far, the team has only looked at red dwarfs during their proverbial terrible twos, but they still need to see how more mature red dwarfs act as they grow older. To do this, the next stage of the HAZMAT study will investigate the flare activity of middle-aged red dwarfs — those around 650 million years old — before moving on to the oldest age bracket. So stay tuned, because by continuing to study how red dwarfs evolve (and hopefully quiet down) over time, we will ultimately better understand the true habitability of planets orbiting the most common type of star in the entire universe.