Lava Reaches the Surface at Indonesia's Agung as Eruptions Continue 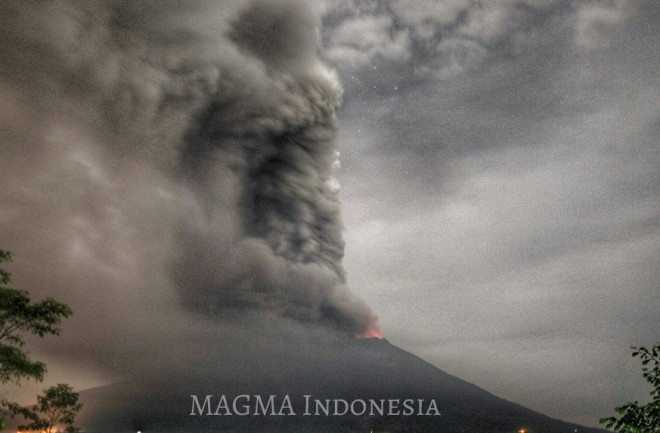 The eruption of Agung in Indonesia, seen on November 27, 2017. The ash plume may be as tall as 9 kilometers, although the ash plume height has been very difficult to confirm. The glow from the new lava in the crater can been seen clearly. PVMBG/MAGMA Indonesia. UPDATE NOVEMBER 27, 2017: It seems that Indonesia's Agung is in full eruption now after the start of events last week. The emergence of lava at the summit over the weekend has lead to a more-or-less constant ash plume that is sometimes split into a dark ash-rich plume and a lighter steam-rich plume (see below). This isn't uncommon during volcanic eruptions and might hint at multiple vents in the main crater. There is definitely ash falling on the area around the volcano (see below), leading to more evacuations and the closure of Ngurah Rai Airport in Denpasar and other airports, stranding passengers. The current Darwin VAAC warning has ash reaching FL300 (~30,000 feet/9 kilometers) with the ash drifting to the east, covering most of the island on Lombok. This likely isn't the plume height, but ash is drifting to that level -- the plume height has been very difficult to determine so far. The PVMBG has put Agung on Red Alert status (its highest) and created an exclusion zone around the volcano that reaches 8-10 kilometers.

Interesting ash plume coming out of #Agung with two columns of different colors. One has a higher ash content (darker), the other has a higher steam content (lighter). pic.twitter.com/g4SBCi4POl

Now, the threat from the eruption isn't lava flows. In an explosive eruption such as this, it is the ash fall and the potential for ash to mix with rainfall to create volcanic mudflows that is the real danger. Ash is falling in the area around the volcano as well (see below), so people living near Agung should be cautious going outside without proper breathing protection and they will likely need to protect crops and livestock as best as they can. If the ash fall becomes heavier, then it could become a danger to roofs as ash might seem like snow, but is 2-3 times more dense. However, at this point, the eruption isn't intense enough to lead to that worry. Some satellites have captured the eruption in action, including a great loop from Himawari-8 showing the grey ash mixing with the white clouds above Indonesia. Sulfur dioxide from this eruption has also been detected by Suomi NPP

A look at some of the volcanic emissions on 11/26 from Mount #Agung in #Bali from #Himawari GeoColor - #volcano#Indonesiapic.twitter.com/Ec9F8wvouC

The new eruption at Indonesia's Agung on November 26, 2017. Webcam capture. It appears that the small blast that happened earlier this week

at Indonesia's Agung was, in fact, the opening salvo of something more. New explosions happened today

at Agung and in the dusk, a red glow from lava was clearly seen at the summit of the volcano, reflecting off the ash plume (see below). You can watch the eruption

on a webcam pointed at Agung and the top image is a shot of the ashy plume seen on the morning of November 26. The PVMBG has moved Agung back to the Orange alert level (the 3rd of 4).

@eruptionsblog Looks like Agung has started a magmatic eruption. pic.twitter.com/xMZbJ2nzCo

What does this mean? Well, it means that we should expect eruptions to continue (see video below). Air travel in and out of Bali have already been disrupted

by the ash-rich explosions that have sent volcanic debris as high as ~6.5 kilometers

(22,000 feet), although the observed plume itself during the day reached only ~1.5 kilometers (5,000 feet). The Darwin VAAC (Volcano Ash Advisory Center) has the ash drifting to the southeast

over Bali and Lombok. Drone footage from the volcano taken on November 25 (before the new eruptions) showed a new pit crater likely made by the November 21 eruption.

Light ash is falling in the area around the volcano as well (see below), so people living near Agung should be cautious going outside without proper breathing protection. Thousands more people have left their homes

Light ashfall from the #Agung eruption. Don't get this in your eyes - trust me, it hurts. This is from personal experience. https://t.co/xZXTrpKsRP

There has not been a big change in the seismicity at the volcano either, especially compared to the peaks of earthquakes in October (see below).

Earthquakes at Indonesia's Agung as of November 26, 2017. PVMBG. I will try to update this post if things change, but so far, the new eruptions have been relatively small ... but the arrival of new magma at the summit crater is the big change.