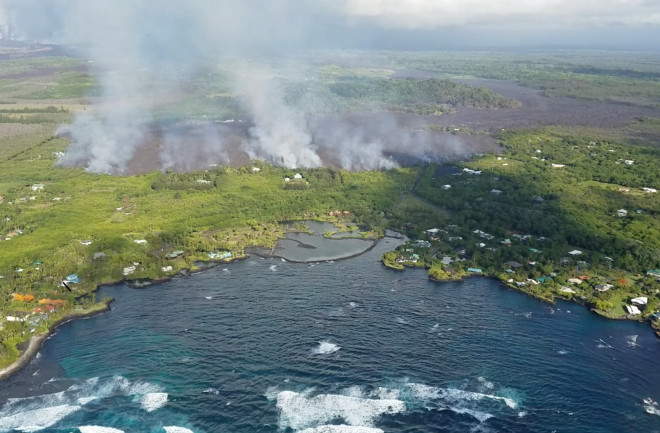 Lava flows approaching Kapoho Bay in the lower East Rift Zone of Hawaii on June 3, 2018. USGS/HVO The active eruption from Fissure 8 on Kīlauea has now produced a lava flow that is reaching the ocean at Kapoho Bay -- across the middle of "Vacationland Hawaii" (see above), another development with many houses. The lava flow is forming a lava delta into Kapoho Bay, extending the land out into the ocean. The lava flow itself is almost 0.8 kilometers wide when it hits the sea and has created a delta a few hundred meters into the bay.

UPDATE 10 PM ET, June 4: It now appears that lava has filled much of the bay:

Video shows conditions at Kapoho Bay during a helicopter overflight on 6/4/18, around 6:15 AM and again around 1:38 PM; lava nearly fills the shallow bay.https://t.co/gkUkkYpYJipic.twitter.com/K9bM0JVK6h

formed from seawater and hot lava interacting. Unfortunately, the winds are blowing the laze inland, so people need to stay away from the ocean entry. Hawaiian officials are imploring people to evacuate

), both due to the volcanic events (like laze and lava flows) but also because as the lava blocks more roads, it will make it harder to evacuate later on. In fact, people had to the evacuated by helicopter

over the weekend because their access routes were getting covered. People are also stranded with power or water

due to the lava flows. The NPS, USGS and Hawaiian authorities are working to open another escape route

through the national park, but work on that road will last for another week or two.

#LeilaniEstatesEruption#KilaueaVolcano UPDATE: This video of fountaining at fissure8 in #LeilaniEstates & the fast-moving lava river it created were taken by Hawaiʻi Island Se.Kai Kahele who flew over the lower East Rift Zone on 6/3 https://t.co/Nt0XZw9CJf@HawaiiNewsNow#HINewspic.twitter.com/lr2dA48ieC

(see above), which is typical for these Hawaiian-style eruptions, where a new cinder cone can get established. This doesn't mean that new fissure might not open or old fissure won't reactivate, but much of the lava is now being erupted from the fissure 8 cone.

Animated GIF of radar images of the expanding Halema'um'u Crater at Kīlauea in Hawaii. USGS/HVO. Up at the summit, a M5.5 earthquake hit the caldera yesterday

and it was followed by an ash-rich explosion that reached ~2.5 kilometers (8,000 feet) up. The crater that once housed the Halema'uma'u lava lake has grown (see below) from being a few hundred meters across to over a kilometer across -- and all that debris is falling into the pit/conduit. Check out this before/after picture of the crater from Planet

- you can clearly see cracks forming and enlargement of the crater itself. This could mean that the ashy explosions have become rarer as more debris clogs the vent. Now, whether that means the vent will "choke" with debris or a larger explosive eruption could happen is unclear, according to the USGS

. As the summit continues to subside (over 1.5 meters so far), earthquakes are continuing

with over 500 in the last day -- the most ever recorded at the summit in a day. On one hand, Kīlauea seems to have settled into a pattern of lava flows from the Leilani Estates fissures and explosions from the summit. However, as we are in somewhat unprecedented (in recent times) activity, it is still unclear how long this eruption will last and how much it could change.