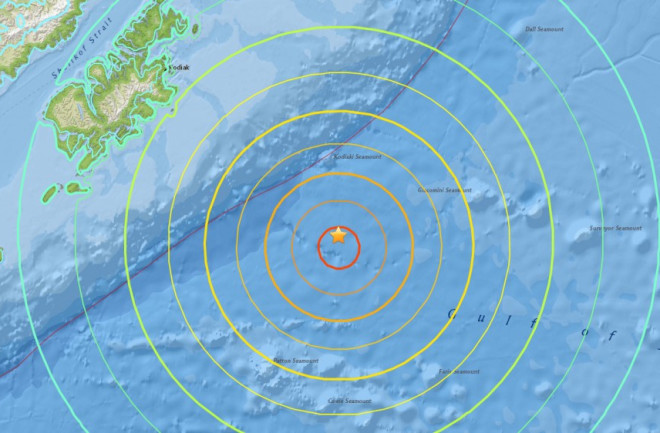 USGS map showing the epicenter of the January 23, 2018 M7.9 earthquake in Alaska. USGS While many people in the lower 48 states were asleep, Alaska experienced its largest earthquake in over 3 years. A M7.9 earthquake occurred 280 kilometers to the Southeast of Kodiak Island ... or, in other words, in the middle of the ocean near almost nothing. However, when it comes to earthquakes, occurring in the middle of the ocean has the potential of being just as dangerous as on land as there is the potential for a tsunami. Directly after the earthquake, the Pacific Tsunami Warning Center in Hawaii issued a watch for the western seaboard of Canada and the United States that there was the potential for a tsunami to be generated by this large earthquake. There were some evacuations of low-lying coastal areas right after the earthquake due to this threat of a tsunami. Luckily that wasn't the case and all tsunami watches have now been cancelled. That being said, the earthquake did generate a small tsunami (~3 cm) that was detected Canada's Ocean Networks (see below).

This isn't too shocking considering the magnitude of the earthquake. Usually, during earthquakes in subduction zones like Alaska, tsunamis are caused by either flexing of the plate during the earthquake -- the "snapback" as stress is released, like what happened in Sumatra in 2004

-- or by submarine landslides that can be triggered by the earthquake. The location of today's earthquake on the Pacific Plate before it does down in the trench (~25 kilometers) and the motion of the earthquake looked to be strike-slip

-- that is, side by side motion -- rather than reverse motion. Reverse motion earthquakes

are caused by the slab of ocean plate going down under the overriding plate (in this case, North America) and they can be the ones that generate the large tsunamis. The conditions of today's earthquake, before the plate goes down and a transform motion, means that there was less of a chance of a tsunami. As with most large earthquakes, this one has been followed by at least 17 aftershocks that have been M4-5.

Here's a time-magnitude plot of the sequence so far. 17 aftershocks with magnitudes in the 4-5 range. Also a map, but most of these have not been reviewed yet, so locations may be off. Of course there are many smaller aftershocks that we're not getting automatic locations for. pic.twitter.com/jnA9aDSZiQ

The great Alaskan earthquake of 1964

did generate a tsunami that claimed lives along the western seaboard of North America. That earthquake was over ten times larger (M9.2) and much of the right subduction-related reverse motion style that we might expect to generate a tsunami. It also happened much closer to land, so it was felt broadly across Alaska and Canada.