Kīlauea's Fissures Pour Out Lava While Merapi Continues to Cause Concern 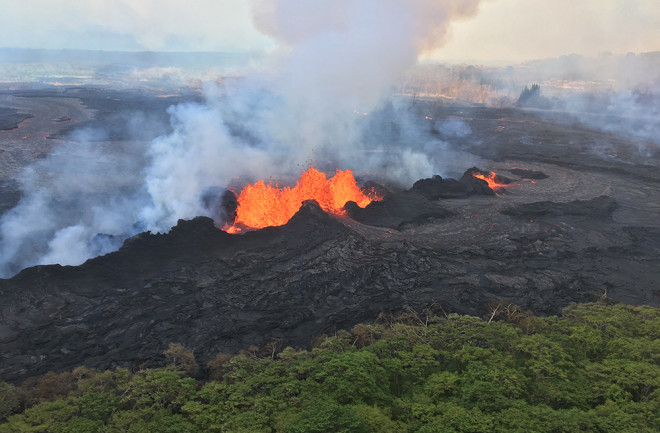 Lava fountaining up to 50 meters from Fissure 22 near Leilani Estates on Kīlauea, seen on May 22, 2018. USGS/HVO With the eruption at Kīlauea dominating the news, I thought it important to highlight the other developing volcanic crisis that is happening right now. Check out that news after we catch up on what's going on in Hawai'i. Kīlauea

UAS flight of Kīlauea Volcano's Lower East Rift Zone during the overnight hours of May 22, 2018, captures activity at the fissure complex and lava flows that extend to the ocean; helps scientists assess hazards. https://t.co/a5Bv42SxyEpic.twitter.com/hGaZoYZ8YP

However, what really still has much of the world's attention is the ongoing lava flows, fountains

and explosions (see above and below) from Kīlauea. According to the latest report from the Hawaiian Volcano Observatory

, it is the middle of the Leilani Estates fissures that are the most active right now

. Some of the lava flows from these fissures are now feeding multiple ocean entries

between Pohoiki Bay and MacKenzie State Park (see map below). Be sure to check out the great infrared image of the lava flows

taken by Landsat 8 along with USGS video of "methane flames"

caused by lava burning vegetation seen the other evening. UPDATE May 25 9:00 AM ET: The U.S. Marines are preparing helicopters in case the last escape route

for some communities in the lower Puna gets blocked by lava advancing towards the sea.

Composite satellite thermal image of the Leilani Estates eruptions on Kīlauea, seen on May 22, 2018. USGS/HVO. Luckily, although there are still a lot of earthquakes happening under the lower East Rift zone, meaning more magma is moving to the Leilani Estates fissures, they don't seem to be propagating further east. We'll have to wait and see if that means this eruption is going to establish itself in these middle fissures for the duration. (I would also not recommend trying to move a just-erupted volcanic bomb with your bare hands

Had to edit some video for Twitter! Footage of vigorous lava eruptions from fissure 20 at #Kilaeua#volcano in #Hawaii today - the heat from the larger fountains was intense! pic.twitter.com/upNTNBbTs5

The question I've gotten quite a bit lately is how long this eruption will last and so far, there aren't a lot of signs that the eruption is close to ending. The eruption of Barðarbunga in Iceland

that formed the Holuhraun lavas in 2014-15 lasted for months and ended up spilling over a cubic kilometer of basalt lava from a series of fissures, eventually forming a large central cone that housed an ephemeral lava pond

. Now, I'm not saying that this eruption will be that dramatic -- Iceland tends to produce much larger basaltic eruptions than anything Kilauea has experienced. However, the timeframe of eruptions like these could be months when looking at Kīlauea's past and analogous events at volcanoes in similar settings (like Iceland). UPDATE May 25, 9:15 AM ET: The May 25 HVO update mentions that fissures 7 and 21 are now feeding into a small lava pond! This isn't being fed from below like a lava lake, but rather lava accumulating near the vent and staying hot enough to form a pond. Check out the progression just over the last few weeks on the lava flows from these fissures:

The evolution of the #Kilauea Lower East Rift Zone lava flow through the lens of a thermal camera. More info: https://t.co/8Y4gPq7VSYpic.twitter.com/vjvmR7HGWj

from all the ash

. These blasts will continue as long as the summit deflates and magma drains out towards the lower East Rift zone eruption. A few moderate earthquakes

struck the summit area over the past few days as a result of the continuing deflation. Coming back to the Barðarbunga eruption, we saw the same deflation and collapse in the main part of the volcanic system's caldera

while the lava erupted on the periphery. A UAV flight was able to observe

the Halema'uma'u crater and see the steaming crater (well, steam mixed with ash). The USGS also had to remind people

that no, Mauna Loa is not erupting

. This seems to be a persistent rumor with the activity at Kīlauea, but there is no connection between the two volcanoes that will lead one to start erupting because the other is already doing so. Everything is pretty much normal at Kīlauea's larger, older cousin. Considering these rumors that want to make the eruption a larger disaster than it is, I'm glad someone made this image to remind us of the scale of events:

Love this graphic from @HawaiiNuiBrewpic.twitter.com/ubyroplFYr

If you want to read or watch some more of my observations about these eruptions, check out these articles or TV spots:

Merapi Activity at one of Indonesia's most active and deadly volcanoes of the last century continues to increase. After a steam-driven eruption a few weeks ago (the first in 4 years), the phreatic explosions at Merapi have continued

near the volcano. This also means the ash from these eruptions is a hazard to aircraft

on Java, especially those flying in and out of Yogyakarta. So far, only 660 people have had to evacuate

due to the unrest at Merapi, but remember, over 4,000,000 people live within 30 kilometers (~19 miles) of the volcano. To compare that to the eruption at Kīlauea where 8,400 people live the same distance of the volcano. Ash from these explosions can be seen in the Sentinel-2 images in the tweet below.

The last major eruption of Merapi in 2010

killed hundreds of people, so even with the relatively small eruptions, the PVMBG has declared a 3-kilometer exclusion zone around the volcano. The Institute for Research and Technology Development of Geological Disaster (BPPTKG) in Yogyakarta has stated that they think the volcano

is "entering a new magmatic phase" but cautions that there are no signs so far that this eruptive phase will be as bad at the devastating 2010 eruptions. I interpret this as meaning that these steam-driven blasts are not merely due to water percolating into the volcano, but rather new magma rising up under the volcano.