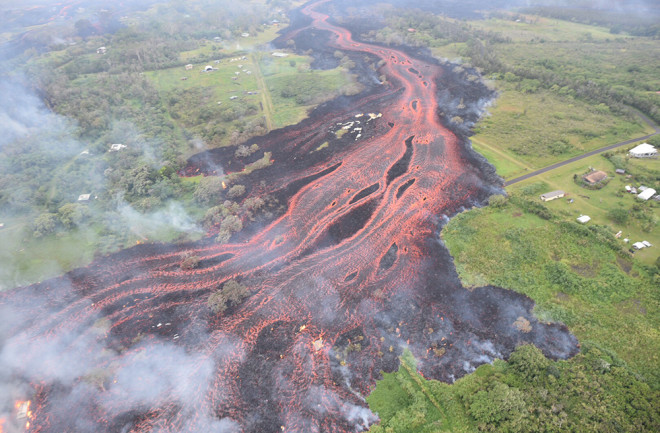 Lava flows from fissures 16-20 moving across the landscape on May 19, 2018. USGS/HVO. The eruption at Kīlauea had a number of firsts over the weekend, some of them quite significant. The style of eruption continued much the same as we've been seeing: lava flows, fountaining and spatter in the lower East Rift zone near Leilani Estates and intermittent explosions from the summit caldera. However, the nature of the former has changed over the last few days. Lava reaches the ocean For the first time in this eruption, lava has reached the ocean. The lava flows produced by fissures 17-20, erupting on the eastern site of the Puna Geothermal Venture, have been quite vigorous and fast-moving, suggesting that the lava may be hotter and less viscous (more on this below), so instead of chunky a'a flows, we've been seeing lots of pahoehoe flows. These flows seem to move like streams in channels, even becoming braided like a river system. However, even if the lava looks like it is moving like water, it is nowhere near as runny as water -- it is more like the consistency of cool honey or motor oil. However, a lot of it is coming out and it can get superheated in the channels as it builds levees (walls) on the sides of the channels.

Lava from fissure 20 entering the Pacific Ocean on May 20, 2018. USGS/HVO. Now, it is the lava channels (see top) that really allow for the lava to travel further. The channels carried lava to southeast and then multiple lava flows moved down the slopes of the lower East Rift, eventually reaching the Pacific Ocean (see above). That means for the first time in this event, the island is getting bigger! Now, it hasn't added much, but this is how the Hawaiian island grow, with lava flows adding to the edges. This new land may be ephemeral as the wave action can break the fragile lava apart and the lava platforms that form can collapse into the sea. However, eventually enough lava makes it to the sea to add new land.

The biggest hazard from this ocean entry

now is the steam generated by the lava

hitting the seawater. This produces a mist that is acidic and fill of tiny volcanic glass shards formed by the lava breaking apart when it cools rapidly as it hits the water. This is why you should always stay away from an active ocean entry -- you breathe in this vapor and it can kill you ... not to mention that these lava benches being formed are unstable. UPDATE 11:30 AM ET May 21: The lava flows heading to the ocean also cut off Highway 137

, meaning many people will have a more difficult time evacuating the area if needed. The first lava-related injury This weekend also saw the first injury caused by the lava

erupting near Leilani Estates. A man watching the lava spattering from an active fissure from a porch got hit in the leg by a chunk of spatter, breaking his leg. Like I mentioned above, the lava might seem like it is flowing and flying like water, but it is molten rock, almost as dense as solid rock. So, imagine getting hit by a solid rock flying through the air hundreds of meters ... and then make it ~1200ºC (2000ºF) and you can imagine the pain. Lava spatter is unpredictable both in terms of the direction the blobs of lava fly and how far they might fly. It is always best to give the lava fountains and spatter a good deal of distance (like watching them on a webcam

). Kilauea produces an andesite For the geologists watching the eruption, one surprise was the composition of some of the lava erupting from fissure 17. The initial analyses show that it is 57 weight percent silica ... which makes it an andesite. Now, Kīlauea is consistent if anything and it almost always erupts basalt, which has less silica in it. So, a lava erupting 57% silica is pretty unique for Kilauea and suggests that the basalt coming from up on the East Rift from the summit mixed with some other magma to form the andesite.

Now, my rough, back-of-the-envelope calculation would say you would need about 60% basalt (49.5 weight % silica) and 40% dacite (67 weight % silica) to make a lava like what was erupted at fissure 17. This would suggest that some body of older magma that has sat around and crystallized in the East Rift to make dacite may have interacted with the new magma being fed into the system, Mixing like this is common at other volcanoes, but a hybrid lava like this is rare at Kīlauea. This is akin to what is thought to have happened during the eruption of Eyjafjallajökull

in Iceland in 2010 (with the BIG caveat that this mixing at Kilauea is not going to produce a massive explosive eruption like we saw in Iceland.) One interesting note: the Puna Geothermal Venture

, right next to where fissure 17 is erupting, drilled into a dacite magma at 67 weight % silica

during some exploratory drilling in 2005! Right now, it is only conjecture on my part, but if the new East Rift basalt mixed with this dacite melt, that would be a great way to get the erupted andesite. You can read the full report on that dacitic melt here

. NOTE: As the discussion in the comments below details, it doesn't need to be magma mixing to create this andesite. It could be basalt allowed to sit around, cool and crystallize to form an andesite -- a process called "fractional crystallization". Looking at the crystals in these fissure 17 lavas should help determine which process was at work: mixing or fractionation. This difference in composition may explain why some of the initial lava erupted from Fissure 17 was very blocky and sluggish compared to what is erupting now. Andesite is stickier than basalt and tends to form blocky lava flows (or in this case, something close to the rubbly a'a), so the lava moves slower and spread like pancake batter. The more recent lava that appears to be flowing as ropey pahoehoe down the lava channels is likely lower in silica and hotter, both characteristics that make lava more runny and easier to flow. All in all, an exciting and tragic time on the lower East Rift zone of Kīlauea.