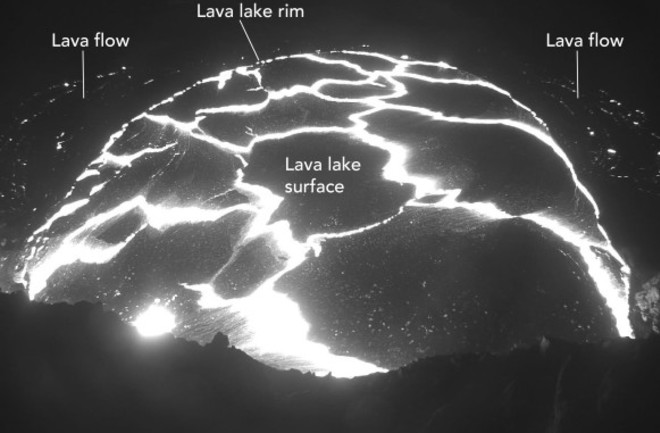 The surface of the Halema'uma'u lava lake on the morning of April 29, 2015. At least two small lava flows can be seen from the overflowing lava lake. USGS/HVO webcam Kilauea in Hawai'i has been erupting constantly for over 30 years. This doesn't mean that it has been doing the same thing for that long, although many volcanic features have been persistent, like the lava lakes at the Halema'uma'u and Pu'u O'o craters, along with the lava flows that cover the pali. Kilauea has also seen ups and downs in the eruptive activity, from long periods where only a few flows are active to entirely new fissure eruptions on its flanks. This change in eruptive character can be most readily seen in the levels of the lava lakes in the two craters. Some times, the lakes are deep within their crater so that only the steam and gas plumes and an eerie glow can be seen. Other times the lava lakes can fill so high that they spill out of their craters and generated a lava flow field around the lava lake.

Lava spilling out of the Halema'uma'u lava lake at dawn on April 29, 2015. USGS/HVO webcam Right now, the lava lake within the Halema'uma'u crater (which has been active since 2008) has just spilled over its rim (see above), creating some lava flows in the crater. The lake has been slowly filling for the past few months, but now it is only a few meters below the rim of the crater. Now, I've seen some articles that suggest that the lava lake reaching this level is something worrisome. It isn't---the lava lake sits in a crater that itself is in a crater ... that itself is within a larger caldera (see below), sort of like Russian stacking dolls. The EO-1 image taken July 30, 2011 of Kilauea's summit shows this relationship, with the lava lake only a small portion of the greater crater and caldera. The Halema'uma'u crater is a "pit crater" formed by explosions on Kilauea, including the famous 1924 eruption (interestingly, the explosion was likely caused by an especially low lava lake). The current lava lake is the summit vent for the volcano within this pit crater. The whole Kilauea caldera for the volcano was likely formed by collapse during an eruption in 1790, but that is still debated.

NASA EO-1 image of the summit of Kilauea, showing the relationship between the Halema'uma'u lava lake, pit crater and Kilauea caldera. NASA Back to the current events! This morning, part of the wall of the crater collapsed and fell into the lava lake, causing an explosion as all that cold, likely damp rock hit the molten surface of the lake---you can see a USGS video of the explosion here. The explosion threw spatter (chuck of molten lava) all over the former observation parking lot that is on a now-closed portion of the caldera road. One of the cool things in the video is watching how the lava lake surface responds to the explosion and collapse, with a long-lived "wave" that keeps much of the surface free of the dark, cooling lava. This is likely the biggest hazard posed by the filling of the lava lake, where interactions of the cold rock around the lava lake could lead to more explosions. With lava lake were reaching over the top of the small crater in the Halema'uma'u crater, then lava flows would create a new flow field within the pit crater. In the very unlikely event that the pit crater fills, then we'd get lava flows in the caldera. In all, this is business as usual at Kilauea, where lava flows will continue to fill in the pit crater until it reaches the level of the caldera floor, unless a new explosion carves it back out again. You can watch all of this exciting lava lake action on the USGS Hawaii Volcano Observatory webcams that give you all the great views of the lava lake. These webcams work hard, even getting splattered with lava (below) as they gaze into the crater.

The inteprid HVO webcam looking into the Halema'uma'u lava lake, with some spatter on its cables and case (yet still operating). USGS/HVO