Kilauea Eruption Continues: How Long Could It Last? 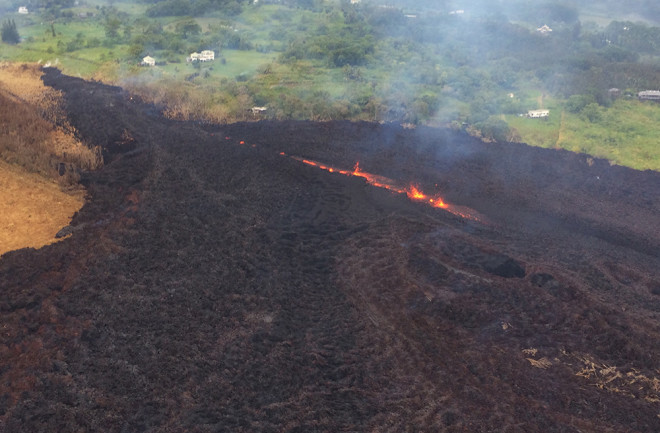 Lava flows from Fissure 17, seen on May 17, 2018. USGS/HVO The eruption at Kīlauea is still captivating the nation, as it should because this volcano hasn't behaving like this in almost a century. I thought I'd take a moment to step back and review of the main events so far and what it might all mean for Kīlauea and the people who live around the volcano. These eruptions are separated by a long way if you look at the satellite data and should almost be treated at two different events. The Leilani Estates Fissures As we enter the third week of the fissure eruption that started in and around Leilani Estates, much of the same activity continues. More fissures have opened and now we're up to 21 cracks opening in the ground. Lava flows, spatter and volcanic gases have dominated the eruption, with some of the flows (from fissure 8 and 17) have reached over a couple kilometers in length (see map below). The lava flow field from Fissure 17 shows multiple lava flow flows and a few channels developed in the eruption. The flows seem to have stalled, suggesting less lava erupting from the main fissure.

Thermal satellite image of the Leilani Estates fissure on May 18, 2018. USGS/HVO The earthquakes and inflation in the lower East Rift zone continues, so that means this eruption is likely not going to end anytime soon. The continued opening of fissures means that our "burst pipe" in the East Rift zone is still feeling pressure from magma moving from the summit down into the area of Leilani Estates. The question now is whether fresher, hotter magma might start erupting. The sulfur dioxide emissions from the eruption have already begun to damage vegetation in the area as well.

UPDATE 8:30 PM ET May 18: Here is a livestream of the activity at Fissure 17 (thanks to the USGS) [embed]https://www.youtube.com/watch?v=SEcLitBiGhY[/embed] UPDATE 9:15 AM ET May 19: The new pahoehoe lava flow from fissure 20 has been moving over 200 meter per hour and have separated into three lobes. The lava flows from the newer, eastern part of the fissures do appear to be flowing faster than the early flows, suggesting they could be hotter. This image below shows the extent of the fissures across Leilani Estates:

This image from an overflight earlier today captures the extent of the fissure activity in Puna better than any other I've seen. Agree with @janinekrippner - heartbreaking for the local people: pic.twitter.com/CDnKb7WAlg

The Summit Explosions Meanwhile, the eruption at the summit

has changed dramatically. In mid-April, we were looking at a rising lava lake that eventually overflowed and covered the bottom of the Halema'uma'u crater with runny, pahoehoe lava flows. Now, here in mid-May, the summit lava lake has drained so far that the lava is interacting with the groundwater table to produce big, explosive eruptions. The largest so far was an ash plume that may have reached 9 kilometers (30,000 feet)

with smaller plumes that reached 3-4 kilometers as well.

We also observed a volcanic explosion in addition to the Galactic center tonight!

Now, this might seem like really tall ash plume, but in the scale of volcanoes, they aren't even what we would call "Plinian" eruptions

that reach 30-40 kilometers (98,000 to 130,000 feet)! For Kīlauea, these explosions are big and have thrown blocks of old lava as large as almost a meter across over the parking lot of the Hawaiian Volcano Observatory.

#Kilauea began tossing "ballistic blocks" up to ~60 cm across from the Overlook vent as of yest. morning local time, reflecting "the most energetic explosions yet observed." This ash-coated block fell a few hundred meters from the vent. (photo: @USGS) https://t.co/4T1d8Akcbvpic.twitter.com/TEUAVH3AEF

UPDATE 8:30 PM ET May 18: If you want to see a whole bunch of great animations and graphics about the May 17, check out this great website from NOAA/CIMSS Volcanic Cloud Monitoring

. UPDATE 9:15 AM ET May 19: The summit experienced another explosive event overnight, sending ash over 3 kilometers (10,000 feet) into the sky. The USGS is also reporting

that recent satellite images show a small part of the summit crater is slumping, likely due to the withdrawal of magma from under the summit. This is nothing too dramatic, but shows that the Halema'uma'u crater is likely enlarging as like what happened in 1924. Things that aren't happening A lot of rumors have been flying around about the Kīlauea eruption. Some rumors that can be dispelled:

The future This is the big question is how long the eruption at Kīlauea will last. Right now, the best estimates are based on two things: (1) what the volcano has done in its past and (2) the monitoring data like earthquakes, inflation/deflation and volcanic gases released. If the latter continues, then we can be confident that magma is continuing to enter the system and the eruption will continue. Past eruptions -- both fissure and summit explosions -- have lasted weeks to months (and longer for lava flows). So, that might be the baseline with which to work. This is not good news for the people who live in Leilani Estates or downwind that might experience potential ash fall