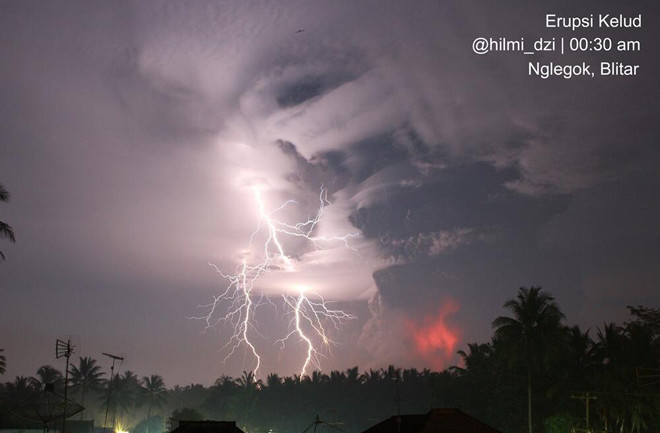 The eruption at Kelud (Kelut) on February 14, 2014. Image: @hilmi_dzi / Twitter, used by permission. The eruption at Kelud (Kelut) has rapidly become another humanitarian crisis for Indonesia. After the impressive explosive eruption yesterday, over 100,000 people have had to evacuate the region around the volcano in case further explosions occur. The heavy ash fall from the explosion has coated towns and cities (see below) over 100 km from the volcano and lead to injuries and deaths after a roof collapsed at one of the evacuation shelters. Currently, the death toll from the eruption is only 3 (2 from the roof collapse and 1 from ash inhalation), but that number may climb. At least three international airport were closed due to the ash and the plume itself (at least the sulfur dioxide) was still clearly visible in satellite images (see below). Some people leaving comments on yesterday's post said they heard the blast of the eruption over 180 km from the volcano and ash was falling upwards of 200 km distant -- to the tune of 5 cm! Be sure to check out the discussion of the shockwave from the blast over on the CIMSS Satellite Blog.

The sulfur dioxide plume from the Kelud eruption, seen at 0637 UTC on February 14, 2014 via OMI. Image: OMI/NASA-NOAA The PVMBG has said that they were surprised how quickly the volcano went from having shallow earthquakes to a full-on eruption. Normally, they expect at least 6 hours between the onset of earthquakes before an eruption at Kelud, but in the February 14 eruption, it was only ~2 hours. This meant that implementing the evacuation after raising the alert status was very difficult for Indonesian disaster relief agencies.

The ash from the February 14, 2014 eruption of Kelud in Yogyakarta, ~200 km from the volcano. Image: Robert Schrader, used by permission. Activity at Kelud tends to be punctuated -- at least looking at past eruptions -- where an explosive event occurs and then the volcano settles. However, it is unclear from any of the reports I've seen whether the PVMBG thinks that new eruptions are coming soon. Based on the evacuation that is occurring, my guess is that they think that the volcano will be restless for the foreseeable future. I haven't seen any news about lahars generated by the eruption so far, but they are a major hazard with any activity at Kelud. Most volcanologists I've heard from about the February 14 eruption say it looks to be on scale with the 1990 eruption, which was a VEI 4.